Home » News and events » All stories » Parties, power and policy 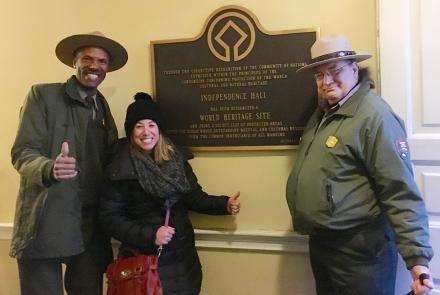 Put yourself in the heart of US policy action
Fellowship Program offers opportunity of a lifetime.

Attending exclusive parties, rubbing shoulders with world leaders and engaging in high-power policy processes are just some of the things Crawford student Colette Boraso has being doing this month.

Colette swapped her day job in the public service for a once in a lifetime opportunity to work with US Senators in Washington DC.

Along with Tim Balin, she secured a spot on the 2016 Congressional Research Fellowship Program (CRFP), a program which placed her within the bustling halls of power in the capital of the United States for three months.

Colette studies a Masters of Environmental Management and Development at Crawford School of Public Policy and works at the Department of Agriculture and Water Resources on water policy and regulation.

She applied for the program because she wanted to broaden her knowledge of US government operations, specifically Congress and international environmental law and policy.

She was placed in the busy offices of Senator Gillibrand, the member for New York State and Colette couldn’t have been more excited.

“When I found out that I would be working for Senator Gillibrand, I was elated. She is a progressive Democrat and an advocate for women’s rights and the environment,’ she said.

“I’m working directly to the Senator’s legislative aide and legislative correspondent who deals with all environmental issues.

“I’ve been involved in the preparation for committee markups and hearings and will also see senators voting and discussing bills and current topics.”

Despite a busy work schedule, she still finds plenty of opportunities to get out of the office and be part of the action.

“I have already been to the Senate floor to watch the action, but I am also working behind the scenes helping my legislative aide to track the progress of bills and amendments - there were over 200 amendments filled on a recent bill that was being debated,” she said.

“The scale is something else and the political machinations incredible!”

Living in the US capital also has its perks, with politicians, students, and locals alike ready to meet, greet and take in a lecture or two.

“I’ve been out and about non-stop since my feet touched the ground here,” she said.

“I’ve been sightseeing and taking trips to other States. I’ve also been going to night briefings on things that interest me, and I’ve made new friends, many of whom work on the hill, and some who are ANU students. Everyone seems to be open to making the most of our experiences.”

She has also made some impressive connections along the way, and could even claim connections to a possible future president.

“I work in Hillary Clinton’s former office space, and I am living in the apartment building that a young Hillary Rodham lived in when she was an intern and when she later worked on the Judiciary Committee! Who else can say that?”

There has also been plenty of opportunities to get swooped up in the glitz and glam of the many exclusive parties being thrown.

“I was a guest of Foreign Minister Julie Bishop at her G’day Australia event hosted at the Australian Embassy, where she opened an exhibition featuring a talented Aboriginal artist and spoke about what it meant to be Australian and our deep ties with the US,” she said.

“That was also the first time I met the new Ambassador Joe Hockey, but later that week he was also a guest at another Australia day event I attended.”

With two-thirds of the fellowship left to go, plenty more parties to attend and lots of key influencers to meet it’s going to be a busy few months, but Colette said there is still so much more to learn.

“I am constantly seeing parallels in law-making between Australia and the US and I hope to bring home some greater insight on the lessons I’ve learned in America.