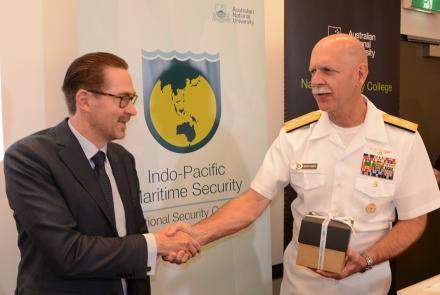 The Indo-Pacific debate
Does the new mental map of Asia hold water?

Leading experts and policymakers on maritime security from Australia, Japan, the United States, Indonesia, China and India have canvassed major challenges for the Indo-Pacific region at a conference organised by the National Security College at The Australian National Univerity this week.

Taking place at the Crawford School of Public Policy, the two-day conference examined the emerging concept of the Indo-Pacific as a single strategic system, as well as maritime tensions including in the East and South China seas.

Professor Rory Medcalf, Head of the National Security College, said that the Indo-Pacific region is becoming widely recognised as the global centre of gravity, whether in terms of economic interaction, demographics, transnational security challenges or the strategic balance.

“As the recent Defence White Paper has affirmed, this is Australia’s region, but it is also a vast maritime zone where the interests of many players are engaged,” Professor Medcalf said.

“These include China, India, Japan and the United States, but also substantial medium and smaller powers, including Australia and Indonesia, and stakeholders from beyond the region.”

Professor Medcalf added that the Indo-Pacific sea-lanes were becoming the world’s principal highways for energy and commerce – making the issues covered at the event even more pressing.

“We were fortunate to welcome some of the region’s best scholars to discuss transnational security issues, the Indian Ocean, the role of Japan as a security partner, and prospects for partnerships involving other countries such as China, India and Indonesia.”

“They offered practical insights and policy recommendations that will contribute to a major forthcoming publication to provide insights to government policymakers in many regional countries,” he said.

Video and audio recordings from the conference will be available soon.