Home » News and events » All stories » Developing a development economist 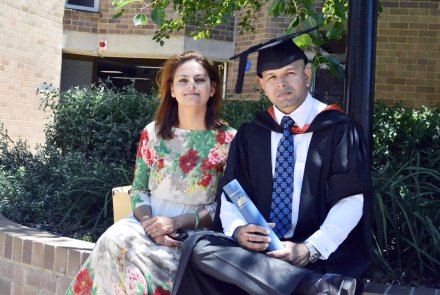 Ashutosh and his wife at graduation

A graduation unlike any other: Crawford says goodbye to graduates

Alumnus Ashutosh Mani Dixit began his academic journey in a small town in Nepal, Bhairahawa, where he dreamed of becoming a development economist and making a difference in the world.

After completing his undergraduate studies and MBA in Nepal, he spent four years in the Nepalese commercial banking industry gaining crucial corporate experience. But he soon realised he wasn’t getting the development experience he wanted.

“I knew if I wanted to establish myself as a long term player in the development and corporate fields, I needed experience in both sectors,” he said.

“So, I decided to hone my expertise in development research and analysis and prepare myself as a development economist.”

After receiving an Australian Awards Scholarship, he graduated from Crawford School with a Master in International and Development Economics in 2014.

“The benefit of studying at Crawford goes beyond the academic realm,” he said.

“It enables one to establish a deep connection with government bureaucrats, policymakers, and regulators, who hold important places in their country, and the value of their connections will only strengthen with time.”

Despite his academic success, he didn’t spend all of his time studying while at Crawford. He was also an executive member of Crawford School Student Association, a regional finalist in the Hult Prize Competition, and a volunteer at the 180 degree-consulting branch.

“It was an enriching experience connecting with diverse networks and making an impact in the social endeavours,” he said.

“I enjoyed being part of Crawford School Student Association, we organised so many events and created a vibrant environment at Crawford. Both staff and students were always so engaged and excited about the events.”

The University’s multicultural environment was also an important part of his experience at ANU.

“Toad Hall and its multicultural environment was another part of my life in Canberra that I cherished. There were students from more than 50 countries, and most of them were already established in their careers. You rarely get such environment elsewhere,” he said.

Since graduating and returning to Nepal, he has worked in many key roles in colleges and universities. He also worked with the Nepal government as a consultant.

His current position as a Senior Economist at South Asia Network of Economic Research Institutes, and Consultant at The World Bank-IFC allows him to work on important issues, using skills from both his corporate and development background.

“At The World Bank-IFC, I work on two projects; automation of foreign direct investment processes in the Department of Industry, Government of Nepal; and data analysis of women’s labour force participation in Rajasthan, India,” he said.

“I believe that the skills that I have developed in research, analysis, and forecasting, as well as in communication and teamwork have served me well and enabled me to become a thought leader in economic policy innovations and as a development economist,” he said.

“Thanks for the opportunity provided by the Australian Government to study at a world-class university like ANU. I had an incredible two years’ journey in Australia.”