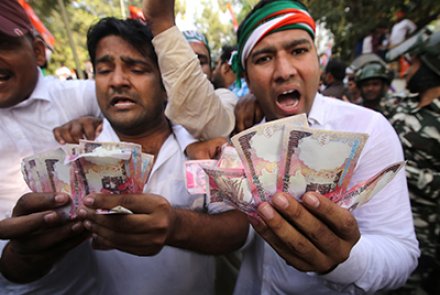 The Indian government hopes the decision to cancel high-denomination bank notes will tackle black money and counterfeit currency, but the decision comes at a high cost, Ramesh Thakur writes.

On 8 November, India abruptly cancelled its two highest denomination currency notes of Rs500 and 1,000 (Rs1,000=A$20). The three stated goals are to eradicate black money, counter tax evasion and destroy counterfeit currency that is allegedly being used by Pakistan-based militants to finance terrorism in India. The modest gains on these three counts are likely to be overshadowed by the substantial disruption to India’s economy through unintended, perverse and pernicious consequences. The shock therapy is even worse as a telling symptom of the ills that continue to bedevil the quality of India’s governance.

Such shock therapy in the world’s fastest-growing big economy is without precedent. Previous instances of large-scale overnight currency cancellation were in countries ravaged by hyperinflation or facing state or economic collapse. By withdrawing 86 per cent of circulating currency when 70-80 per cent of transactions are cash-based, the Indian government has risked burning down its economic house in order to eradicate the pest of corruption.

At 12-14 per cent of GDP, cash plays almost three times a bigger role in India than in most large economies. Fewer than one-third of Indians have access to financial institutions. Only 5 per cent pay income tax, just 15 per cent of the economy is inside the tax net and India’s tax to GDP ratio at 17 per cent is about one-third lower than comparable countries. Demonetisation – and the attempt to bring businesses inside the tax net by forcing them to use banks and digital payments – is thus a frontal attack on the Indian way of doing business.

The policy has been shockingly callous in its indifference to distributional consequences. Reeling from the shock, much of India’s cash-based consumer transactions have ground to a halt with the promised new Rs2,000 notes not yet printed and ATMs and banks running short of replacement cash in exchange for the discontinued notes. The insular political, economic and bureaucratic elites have engaged “mules” to queue and exchange their currency for them.

Ordinary citizens face hardships in the daily purchases of food, medicines, bus and rail tickets, etc. Farmers have difficulty buying seeds and fertiliser and selling crops and perishable produce. Much of the fishing industry is close to collapse. Village labourers have suffered the loss of daily wages as they trek into city-based banks, as have rickshaw drivers, street vendors, domestic workers and migrant labourers, especially in the construction industry.

Yet it will do little to flush out significant proportions of illicit wealth. Estimates put the amount of India’s ill-gotten wealth held in the cash component at just 5-6 per cent. While the poor keep their money in cash, the rich park illicit wealth in Indian and overseas real estate, shell companies, shares, gold and overseas bank accounts. India has experienced the third highest illicit capital outflow ($83bn in 2013) after China ($259bn) and Russia ($120bn) in recent years. Yet India’s tax authorities have been among the least aggressive in going after names leaked in the Panama Papers in April.

The move also confuses the black economy with the informal economy by conflating cash with black money. Demonetisation could permanently damage this informal economy which comprises 45 per cent of GDP and 80 per cent of the work force. India’s formal and informal economies are not quarantined from each other but form a seamless value chain. For example, almost one-third of the working capital of small businesses comes from the black economy. Can that lost capital be replenished with fresh credit?

Most damagingly, the policy highlights many pathologies of India’s governance. Demonetisation cements the Indian government’s reputation for capricious and arbitrary economic actions, which in the past included hefty taxation claims on multinational firms using a retrospective law that the Modi government promised to repeal but has not yet done so. It buttresses the power of economically illiterate politicians and heavy-handed bureaucrats to control a large economy.

Forcing people to stand in line for hours unending and answer humiliating questions is an attack on property rights that puts restrictions on the people’s ability to earn, access and use money. A better solution would have been to shift the balance of economic decision-making away from the state to firms and consumers; simplify, rationalise, and reduce taxes; cut regulations and curtail officials’ discretionary powers; eliminate loopholes; and widen the tax net.

A major cause for the persistence of poverty and the growth of corruption in India is regulators and tax inspectors who harass entrepreneurs at every rung of economic activity because of the maze of regulations and thickets of red tape. Shock therapy without institutional transformation enlarges government while minimising governance; more government equals more corruption. Unsurprisingly, a black market for the cancelled currency notes with a 25 per cent discount was created quite quickly.

Politically, the decision has reinforced Modi’s image as a strong and decisive leader prepared to take bold and tough decisions in the country’s interest. It could denude political rivals of substantial cash assets for fighting the forthcoming elections in Uttar Pradesh, India’s most populous state. On the political downside, the ruling party’s political base includes wholesale and retail traders who deal largely in cash. Their businesses have been gutted. How many marginal small businesses will survive the loss of a week’s or fortnight’s sales and income?

Foreign tourists were caught unawares and most simply did not have the time and patience to stand in queue for long hours for modest sums of money. A substantial proportion of the 25-million strong Indian diaspora is likely to have $100-300 in the high-denomination rupees as convenient small change for use on arrival in India. For these groups, the shock therapy amounts to minor inconvenience rather than major hardship. But several million mildly irritated among a country’s most likely overseas goodwill ambassadors is another sign of not thinking through the consequences and indifference to its impact on the little guys.

Another governance pathology is the failure to tell friends from foes and a stubborn refusal to listen to contrarian voices from well-wishers with the requisite expertise. Instead, the government’s default mode is to attack any criticism as somehow anti-national or pro-corruption. Thus all critics of demonetisation are tarred as willing stooges or useful idiots of political opponents, criminals, corruptly rich or even Pakistan-financed terrorists.