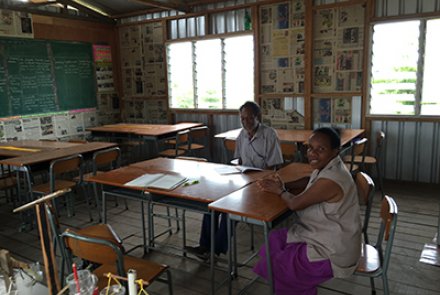 Australian National University researcher Michelle Rooney was recently awarded a prestigious international anthropology award for her work looking at education and citizenship in settlement communities in Papua New Guinea – and she is using the prize money to help a school that was at the centre of her research.

A Research Fellow at the Development Policy Centre within Crawford School of Public Policy, Michelle won the best student paper prize for 2016 from the Association for Political and Legal Anthropology from a field of 46 international submissions.

Feedback on the paper noted that it provided a “nuanced analysis, which contributes to our understanding of citizenship, human rights, urban development, political ecology, and the paradoxes of the state.”

Michelle’s prize-winning paper, titled “We Do Not Qualify for Free Education”: Citizenship in The Segregated Political Economy of Service Delivery in Urban Papua New Guinea, focuses on the Christ the King Primary School in ATS Settlement, Port Moresby.

A chronic shortage of affordable housing in the capital has meant that urban settlements, like the ATS Settlement, have long been a key and growing feature of the city’s landscape. Despite their relative proximity, many settlement communities are not connected to services.

“I first encountered the school during my PhD fieldwork in 2013 where I explored issues related to urban social safety nets, livelihoods and risks,” Michelle said. “Among other problems in the settlement like housing, land tenure, crime, water supply, and unemployment, it was clear that many families could not afford to send their children to school.”

To address this education challenge, the congregation of the Christ the King Anglican Church established the school around 2009. Yet despite rapid growth in student numbers and significant investment from the community, the school is not formally recognised by the Department of Education in PNG, so has remained ineligible for government funding. It relies on the church and non-government organisations to keep its doors open.

“It really begs the question - how can the government of PNG reasonably account for the exclusion of urban schools – like Christ the King Primary – from government funding?” Michelle said.

“The school is meeting the educational needs of this growing urban community, and contributing to the government’s own educational goals.”

Michelle’s prize for her research included US$350 cash. Inspired by the community’s efforts, she has donated the prize to the school for their annual student awards for 2016 and 2017. The awards will go towards male and female students who demonstrate citizenship and leadership in their school community. A separate award will be given for students who demonstrate academic achievement.

“The Christ the King School demonstrates a clear example of how a settlement community in Port Moresby values education and citizenship,” Michelle wrote in a message to the school.

“The fact that this research won this award is testimony to the recognition by an international community of scholars of your work in valuing the children in your community. I hope that further research can be undertaken to translate these efforts into government policy changes that can support communities like yours.”

Michelle was presented with the prize in November at the American Anthropological Association’s 115th annual meeting, held in Minneapolis. She will return to Port Moresby next year to workshop the issues in the paper with policy audiences and the ATS Settlement community.

You can read more about her research on the Devpolicy Blog.