Home » News and events » All stories » India's demonetisation in practice 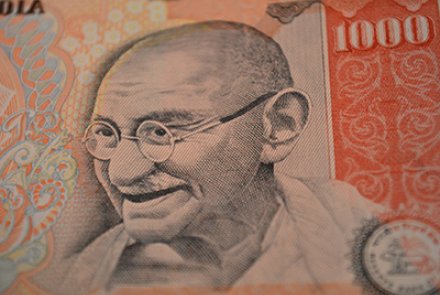 Raghbendra Jha is a Professor of Economics and Executive Director of the Australia South Asia Research Centre, Arndt-Cordon Division of Economics, ANU. Professor Jha is also on the Panel of Experts and is a consultant for many organisations around the world.

India’s recent demonetisation saw the overnight withdrawal of all 500 and 1,000 rupee notes in a move intended to cut corruption and increase electronic payments. However, problems with supplying ATMs and guarding against mass money laundering have marred Modi’s ambitious project, Raghbendra Jha writes.

The gains from moving towards electronic modes of payment and away from cash are compelling. Electronic payments and transfers provide an easy audit trail for governments to tax individuals and businesses and track illegal transactions such as money laundering, financing of crime, terrorism and drug smuggling. Some governments even routinely discourage the use of currency notes

Businesses also benefit from a move away from cash transactions to e-transactions as there is evidence that people spend more when paying electronically. In Australia and other countries this has been behind the move to better regulate credit cards.

Electronic means of payment provide greater security of transactions despite the threat of cybercrime. Carrying large amounts of cash involves large risks of its own and fuels government inefficiency and corruption. A report in Time magazine suggests that carrying out transactions by cash actually hurts the poor more than the rich since it is harder to protect cash against theft, decay, and natural disasters.

Harvard professor and former IMF Chief Economist Kenneth Rogoff in his 2016 book The Curse of Cash, argues forcefully that reducing the role of cash in the economy also improves the efficacy of anti-recessionary monetary policy.

The only people who would lose out from a move toward electronic payments would be those benefiting from illegal transactions in the cash economy.

In 2015, demand deposit (funds in an account that can be easily withdrawn) as a proportion of currency was 0.6 per cent in India, 20.97 per cent in the UK, 5.27 per cent in the Euro area and 3.94 per cent in Australia. Thus, there is a heavy dependence on cash in India. Furthermore, India has a large parallel underground (or black economy) with malefic and dangerous overtones for the rest of the legitimate economy. The fact that large denomination currency notes have been counterfeited and put into circulation on a large scale only exacerbates the scale of the problem.

In announcing its demonetisation policy on 8 November, the Indian government inherited a serious problem. The value of notes to be disallowed accounted for a huge proportion of total currency value. The share of high-value notes rose from 36 per cent of total notes in circulation in 2004 to over 80 per cent in 2014, to about 86 per cent at the time of demonetisation.

Managing the after-effects of removing such a large component of money supply was going to be challenging for a complex economy such as India’s.

In planning its demonetisation the Indian government had to balance two key factors. On the one hand, it needed to ensure adequate liquidity in the economy—which would call for rapid replacement of the withdrawn currency with the newly printed notes. On the other hand, however, it was necessary to deny opportunities for money laundering offered by the rapid exchange of withdrawn currency notes by the new currency notes. It would be necessary to slow down the release of liquidity and closely monitor the frenzied banking transactions that would follow demonetisation.

To ease the immediate liquidity crunch following demonetisation, the government permitted limited exchange of new currency notes for disallowed ones and, for an extended period, waived all road tolls and permitted the use of disallowed currency notes in train, bus and air travel, for buying petrol and other fuels, and for paying utility bills.

Disallowed notes could be deposited in bank accounts but large deposits would raise authorities’ suspicions. As ATMs had to be recalibrated to accommodate the new 2,000 rupee (A$40) notes they did not become functional for some weeks. During which time people faced considerable difficulties in accessing cash through ATMs. Limited cash withdrawals from banks were imposed, with the current limit being 24,000 rupees a week or 100,000 rupees a month. Currency printing presses have been working around the clock.

RBI figures indicate that between 10 November and 10 December, 12.44 trillion rupees in notes of 500 and 1,000 rupee denominations were brought into the RBI indicating that nearly 1 trillion in such notes were yet to be returned. By 10 December, banks had issued notes worth 4.6 trillion rupees over counters and through ATMs.

Clearly, ordinary Indians feel that Prime Minister Narendra Modi’s government is making a serious effort to tackle the bane of black money which has plagued the economy for a long period, and denied them the benefits of development in full measure. There has been political support even from those who are strong opponents of Modi, e.g., Chief Minister Patnaik of Odisha and, particularly, Chief Minister Kumar of Bihar.

However, there is strong opposition from many other political parties. An obvious reason for this could be that these political parties had large sums of money stored in old 500 and 1,000 rupee notes. Some of this wealth could be accounted for if disclosed, but then the political parties would face legal action. Hence, there is actual wealth loss for many political parties. It is well known that the distribution of cash to electorates plays a role in Indian elections Demonetisation has dealt a severe blow to this practice and has had the profoundly beneficial effect of at least partially cleaning up Indian politics.

While bank deposits of less than 250,000 rupees have not generally been questioned, larger deposits are on the radar of law enforcement agencies. Since only limited withdrawals from banks have been permitted, people with large amounts of notes in the new denominations of 500 and 2000 rupees have a case to answer.

On TV, Indians routinely see individuals and businesses who have been caught with large numbers of 500 and 2000 rupee notes and face police action. Further, the government has also announced limits on the amount of gold (another form in which black money is held) that an individual can hold. People with large amounts of gold are also being arrested.

So, on a daily basis the people of India see the holders of black money being prosecuted and their ill-gotten wealth confiscated. This is naturally popular among people who have had to face long queues in banks and in front of ATM machines.

The widening of the tax base post-demonetisation (since large amounts of previously unaccounted income would fall into the tax base) already has the finance minister promising substantial personal and corporate tax cuts in the February 2017 budget. Once this materialises, middle and lower middle-class India would have another reason to cheer for the demonetisation policy. In the meantime, however, the cash crunch is still biting, particularly in the rural hinterland, where bank density is low.

The PM has promised to follow up these policies with one of tackling benami properties. Benami properties are those held by proxies in order to avoid scrutiny for tax and zoning law purposes. Such properties are another major form in which black money is held in India. If this, too, is implemented successfully, corruption in India would be dealt another body blow.

Professor Raghbendra Jha is the head of the Arndt-Corden Department of Economics, College of Asia and the Pacific, Australian National University.

This article was first published by the Australian Institute of International Affairs.