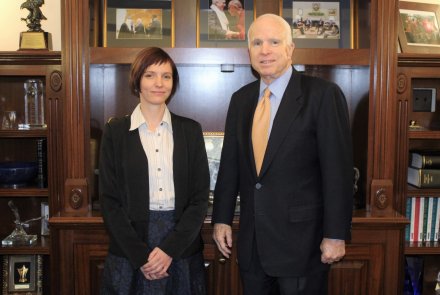 Front row to a new Presidency

Land of opportunity
Fellowship winners to get insider view on US policy-making.

As the world has been watching Washington, one Crawford student has been granted a front row seat.

Master of Public Policy graduate Jasmin Logg-Scarvell is a winner of the Congressional Research Fellowship Program, which sees her spending three months in Washington rubbing shoulders with US leaders and walking the corridors of power.

The Congressional Research Fellowship Program places outstanding ANU honours and graduate students, and recent ANU graduates, in the offices of United States’ Senators with an aim to identify and foster a new generation of leaders while promoting investment in the Australia-US relationship.

Jasmin is working in the office of the well-known US Senator John McCain, in what she says has already been a once in a lifetime opportunity. Her time in Washington overlaps with an especially turbulent few months of American politics, as the Trump Administration takes the reigns from an outgoing President Obama.

“Working and living in Washington DC during the inauguration and first days of a new presidency has been a tumultuous and fascinating experience so far, and things are only just getting started for the new administration,” she says.

Already, Jasmin has had the chance to chat with Senator John McCain and Australian Ambassador Joe Hockey, not to mention several other notable encounters.

“I have developed an uncanny knack for coincidentally bumping into, getting stuck in elevators with, and/or dining in restaurants next to figures such as James Mattis (now Secretary for Defence) and Elaine Chao (soon to be Secretary for Transportation).”

Mixing it with world leaders is not the only perk Jasmin has enjoyed. She has also attended Cabinet nomination hearings and got restricted area tickets to President Trump’s inauguration.

“Spending a few hours standing amongst a crowd of Trump supporters was an atmosphere I will never forget (and for the record, there seemed to be a lot of them from where I was standing!)”

But for all her experiences so far, it has been the opportunity to gain a new perspective of US politics and policy from her position within Senator McCain’s office which Jasmin has most valued. She has especially admired the open and genuine nature of Senator McCain and his staff.

“Senator McCain has a public reputation for being a ‘maverick’ and voting along moral rather than party lines. It has been fascinating to witness how this situation plays out behind closed doors versus in the media, on issues such as the vetting of Trump’s Cabinet picks, reports of voter fraud, and smoothing US-Australia relations.”

But Jasmin has been no mere passive observer of the workings of the Senator’s office. She says that being enthusiastic and not afraid to spruik her policy experience has paid off for her already.

“So far I’ve been asked to write correspondence, compile memos from academic and lobbyist briefings and research the finer details of a bill which the Senator is expecting to introduce.”

Jasmin says she looks forward to contributing further and to writing a research paper that is beneficial to both the Senator and her future interests.