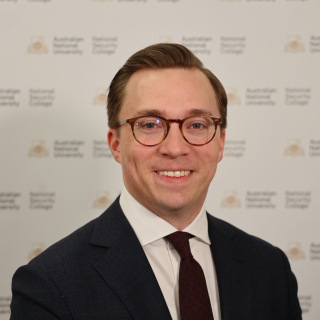 David joined the National Security College in July 2022 as a member of the Policy Engagement team, having previously held multiple roles in the Australian Department of Defence, including in Military Strategy, Strategic Policy, and Defence Export Controls Branches.

His research interests include Australian defence and foreign policy, the strategies of small and middle powers, and instruments of security cooperation (alliances, security pacts, multilateral institutions, international organisations etc.) including ANZUS, the Quad, AUKUS, and Five Eyes. He has been published by the Australian Strategic Policy Institute, Griffith Asia Institute, Incline, and in the Australian Naval Review.

He is currently undertaking a Doctor of Philosophy in International Relations at La Trobe University, which examines the factors that contribute to the evolution, stagnation, or collapse of multilateral security organisations; notably the Central Treaty Organisation, Southeast Asia Treaty Organisation, Anglo-Malaysian Defence Agreement, and Five Power Defence Arrangements.