Home » About us » Sir John Crawford

Sir John Crawford was a great Australian civil servant and a distinguished leader of the Australian National University. As an official and as a scholar, he exercised remarkable influence nationally and internationally. He was a key player in reorienting Australian economic policy in the mid-twentieth century and, along with a few counterparts in Japan and the United States, a pioneer in the building of an Asia-Pacific economic and policy community. 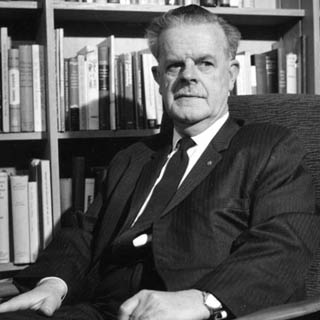 In 1960 Sir John took a different path, joining the Australian National University as inaugural Director of the Research School of Pacific Studies and Professor of Economics, later as Vice-Chancellor in 1968 and Chancellor in 1976. His leadership of the University left a long legacy of scholarly excellence and public contribution. Mirroring the aspirations of our School today, his influence on policy and drive to engage Australia with Asia and the Pacific continued from within the University.

From his university base Sir John played a foundational role in the establishment of the Australian Development Assistance Agency, the Industries Assistance Commission, the Australian Centre for International Agricultural Research (ACIAR), and Consultative Group on International Agricultural Research. Among the many long-term projects he pursued was the promotion of trade relations around the Asia Pacific region and development assistance work, especially in India (through technological innovation in agricultural) and Papua New Guinea.

We think this is a wonderful legacy with which to associate ourselves and one that captures a central part of our mission as a graduate policy school. It is a legacy that sets the standard for all our staff and students.