Home » News and events » All stories » Abandon the alliance 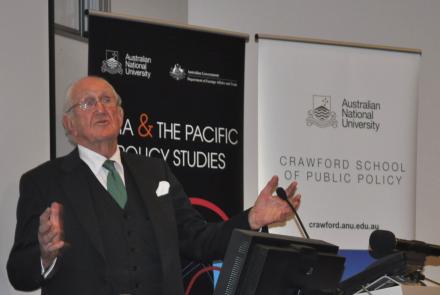 Former Prime Minister Malcolm Fraser, AC CH, has used a talk at Crawford School to argue for Australia to step back from the Australia-US ANZUS military alliance.

Mr Fraser said Australia made a major strategic error and betrayed its national interest by not showing strategic independence from the United States after the fall of the Soviet Union.

He warned that Australia needs to be careful not to follow the US into another war, which could potentially be in the Pacific and involve China.

His talk was based on his new book Dangerous Allies.

Mr Fraser, Prime Minister from late 1975 until 1983, drew on his contribution to the flagship journal of the Crawford School, Asia and the Pacific Policy Studies (APPS).

In his APPS piece, Mr Fraser writes that the country made a serious mistake by aligning itself closer to the US in the post-Cold War era, and the problem has been compounded through wars in Iraq and Afghanistan.

A copy of Mr Fraser’s commentary from APPS, Australia’s role in the Pacific is available online.

Dr John Blaxland, from the Strategic and Defence Studies Centre, doesn’t agree. He said an end of the Australia-US alliance would have major implications for Australia and the Asia-Pacific region.