Home » News and events » All stories » Women and security 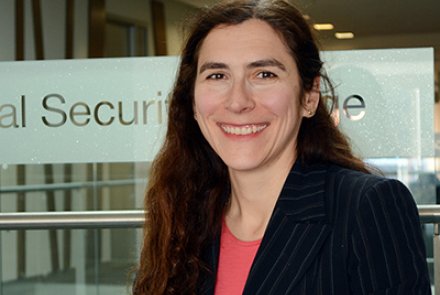 What is one of the best ways of securing and upholding peace in a post-conflict situation? Have women at the negotiating table from the very beginning.

Research has shown the security and equality of women is a vital factor in the security of the state and that increasing gender diversity in decision making leads to better results.

Conference convener Marina Tsirbas, the college’s Senior Executive Advisor for Policy Engagement, said that with two female national security ministers – foreign affairs and defence – there is no better time to hold a conference on women and national security.

“We will be drawing attention to the role women can play as actors and enablers, rather than victims, in the peace and security context,” Ms Tsribas said. “We’re hoping to highlight the hard security nexus between women’s involvement and the peace dividend.”

In addition, the conference will provide a significant opportunity for young and mid-career women to participate in leading on national security issues, whether they be in the public, private or non-government sectors and across academia.

“They will have the opportunity to hear from senior women in the national security space, the strategies they’ve adopted in being involved in decision-making on our most pressing national security concerns, such as defending Australia in an evolving region, growing cyber security threats, and the need to bolster our capacity STEM (Science, Technology, Engineering and Mathematics),” Ms Tsirbas said.

“To put it in modern jargon – we’re mainstreaming gender in security.

Keynote speaker Professor Professor Valerie Hudson, co-author of Sex and World Peace has been named one of the top 100 Most Influential Global Thinkers by Foreign Policy magazine. Dr Habiba Sarabi is the Deputy Chair of Afghanistan’s High Peace Council, a former provincial governor and the Senior Advisor on Women to the country’s Chief Executive.

“I’m particularly looking forward to the women and diversity panel, which will focus on sharing lessons from the public and private sectors and how to achieve better analysis and policy through female participation,” Ms Tsirbas said. “We will hear from representative of the public service commission, KPMG and Chief Executive Women – a great mix of perspectives.”

Head of the National Security College Professor Rory Medcalf said that the conference tackles an important agenda that doesn’t get mainstream attention in the national security community.

“People tend to think of serious strategic issues and then gender-related aspects as an add-on rather than part of mainstream policy-making,” Professor Medcalf said.

“The substantive issue the conference will examine are the clear advantages to government and business of greater female participation and leadership.

“The National Security College caters to the entire community of researchers, policymakers and practitioners in the national security field, so we are ideally placed, and indeed we have the mandate, to carry the debate forward on this important topic,” Professor Medcalf said.

The Women and National Security Conference will be held on 4-5 April at the QT Hotel, Canberra. To see the full program and register please visit the website http://nsc.anu.edu.au/seminars/public-seminars-2017/seminar-20170404.