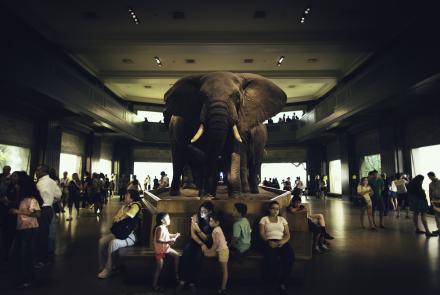 The elephant in the (budget) room

Joe Hockey’s first budget does not contain much tax reform, in spite of headlines on the “temporary budget repair levy”. It does contain some very big cuts to spending in the short and longer term - consistent with Hockey’s claim that “the age of entitlement is over”. But will this lead us to prosperity and opportunity?

Why a temporary levy?

That temporary budget repair levy of 2 per cent for those earning over $180,000 is a hit on Australia’s highest income earners who can certainly afford it. It is predicted to raise $600 million this year; $1.2 billion in each of following years.

What’s wrong with that? It could be a good thing to make that levy permanent - Australia would be in company with a growing number of wealthy countries, including the US, which have been lifting marginal rates on the highest income earners.

And it makes sense to levy it on the highest incomes. The levy brings our top marginal rate to nearly 50 per cent, but the empirical evidence suggests that this is unlikely to negatively affect work or business effort by high income individuals, who are mostly men, and who are not so responsive to higher rates, unlike lower income workers.

But the temporary levy will increase the pressure on tax planning margins, making it more attractive than ever to keep money in companies (at the smaller end, now taxed at 28.5 per cent) or to income split through discretionary trusts. Capital gains will still be taxed at half that top rate. And tax deductions for travel, negative gearing using rental losses to shelter taxable income are more valuable than ever to high income earners. All those negative consequences could be dealt with by tax reform, but that is not on the table yet.

Hockey also has not addressed business tax reform in this budget. Without a carbon tax or mining tax, Hockey still plans to cut company tax by 1.5 per cent, a policy copied by Abbott from Labor’s failed attempt. The budget has kept the controversial paid parental leave policy to be funded by large companies who will continue to pay the 30 per cent rate.

Meanwhile, the Base Erosion and Profit Shifting project of the OECD and G20 continues.

The continuing negotiations around the PPL scheme is a reminder of how controversial these big planks of government policy are.

Its high cost comes from funding the mother’s salary - even at minimum wage - for 18 weeks. It has some great features - a payment that goes to working women, based on their individual income, has to be good both for gender equity and for the broader economy. If it was being introduced with substantial new funding for childcare and help for single parents at the bottom end, I’d be all for it.

By bringing forward Labor’s policy of abolishing the dependent spouse tax offset and mature age worker tax offset, Hockey saves almost enough to pay for parental leave for a year. If he made the temporary levy permanent, this could be enough to cover the cost - in fact, we could see this higher top marginal tax rate as a transfer to some extent from rich men to working women with children. Or alternatively he could cut some of the superannuation tax concessions which are not mentioned in the budget.

The trouble is, the levy is not permanent and the politics mean its unlikely to be retained. And so this turns out, when we examine the cuts to family tax benefit B, to be a transfer from poor women to richer women.

Taxes are needed: for funding government

The biggest question, the real one about our shared identity as a nation and our vision for fairness and prosperity, is also hidden in the background to this budget. That is, what size of government do we want and what should it do?

I’ve noticed a troubling discourse that suggests federal tax revenues are too high, or should be capped at some arbitrary level. Australia’s “tax level”, sometimes called the “tax burden”, the ratio of total taxes collected to GDP, is about 31 per cent. Our federal tax level has been approximately 24 per cent of GDP since the 1980s. The rest is state taxes. This percentage indicates what proportion of Australian economic wealth goes to shared expenditures and responsibilities, and balancing the budget calls for capping government spending at this level too.

The Commission of Audit said that a fiscal rule that should be introduced to cap federal tax revenues at this level. The Commissioners think government is too big and imply that this cap is needed for prosperity - but this is false. Nowhere is there some “rule” of tax policy, or good government, that sets 24 per cent of GDP as an ideal size of government.

In fact, Australia’s tax level is low. Its much lower than all comparable rich countries around the world. We are about level with the US, but they borrow more to fund their government than we do.

As the level of development of a country increases, its tax level tends to increase. Among rich countries, the tax level varies from the US and Australia at the bottom, about 30 per cent to Norway, at 57 per cent. Germany is doing just fine on a tax level about 45 per cent of GDP, which enables it to fund childcare and infrastructure. Norway’s free education for all - yes, its a small rich country but then (except in geography) aren’t we? - has set them up for 3 per cent economic growth and one of the most flexible and open economies in the world.

The implication in Hockey’s freeze on future education spending, and his comment that funding is up to the states, seems to be that any extra taxes should be levied by them. But our most effective revenue-raising taxes are probably best administered centrally - the income tax and the GST. This is a national issue.

Australians need to think hard about whether we are holding ourselves back as a country, if we don’t start raising tax levels to be just a little closer to those of other rich countries, so that we can spend on education, infrastructure, welfare, health and the environment - not mentioned in Hockey’s budget at all. And that means we need to examine overall tax reform for the future.

This article was originally published on The Conversation: http://theconversation.com/tax-still-the-elephant-in-the-budget-room-26103