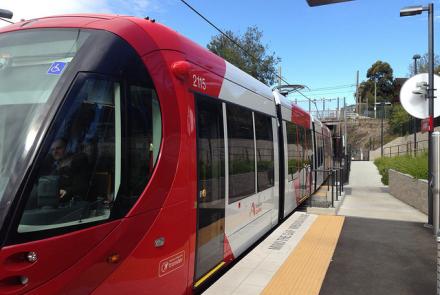 The ACT government should have conducted a rigorous and credible cost-benefit analysis before being seduced by the romance of a capital light rail system, writes Leo Dobes.

Pro-business groups, Capital Metro Minister Simon Corbell and former Prime Minister Tony Abbott have all warned the ACT Liberal Opposition against reneging on the light rail contract if it wins the 2016 election.

Millions in compensation, jobs and Australia’s national reputation as a safe investment destination are in peril, it has been claimed.

Diamonds may be forever but should a future ACT government travel to the end of the line, contractually speaking?

Despite the hype, the Commonwealth and most state governments include a ‘termination for convenience’ clause in contracts for large projects. Such clauses typically permit unilateral termination of a contract by the government, or a possible reduction in the scope of the project.

Termination for convenience would generally envisage some degree of compensation, but only for costs incurred up to the time of termination rather than for the full period of the contract. There may be an implied obligation for governments to act in good faith, but the law on this aspect is not fully settled.

It is also not clear whether the common law doctrine of ‘executive necessity’ would apply if the contract fettered the power of an incoming ACT government, say, in an emergency that required significant reduction of budget commitments.

Any competent bidder will be aware of the “sovereign risk” that is routinely associated with government contracts. The more so with repeated public statements by ACT Opposition Leader Alastair Coe, and the precedent of the incoming Victorian government early this year in stopping construction of the east-west tunnel.

Mr Corbell has been reported as saying that a standard ‘termination for convenience’ clause would be included in the Canberra tram contract. He has rightly pointed out that the cost of termination would depend on its timing and on the final bid price. Neither of these factors is known at this stage.

So would it make sense for an incoming ACT government of either persuasion to cancel the light rail contract? Assuming no technical legal hitches, the issue needs to be examined from both an economic and a budgetary perspective.

At its simplest, a budgetary perspective would involve a comparison of how much cash the ACT government would lose if it continued with the light rail project, compared to how much it would lose if it didn’t. Unfortunately, this lose-lose scenario cannot be clarified until the terms of the contract become known.

The broader, economic perspective is more complex. It would effectively require a comparison of two cost-benefit studies.
One study would need to estimate the social costs and social benefits of continuing with the tram. This base case study would probably be more favourable than if it had been undertaken when the project was first mooted, because some of the expenditure will be a sunk cost by next year, so will no longer be relevant. Even so, the benefits are unlikely to outweigh the costs, at least from the information available from the 2014 Capital Metro business plan.

The counterfactual study of a tramless future would depend on the specific scenario adopted. One scenario might be to simply rip up the infrastructure that has been built. Another might be to increase bus services, perhaps by modifying the new infrastructure for dedicated bus travel, but leaving the route available for a tram in the future.

A proper analysis would also consider the alternative of diverting expenditure to hospitals, schools or other uses.

Two red herrings also deserve consideration: jobs and the sale of existing government assets to pay for the light rail.

‘Sale of existing assets’ is close to a three-word slogan, but is unlikely to be cost-beneficial in all cases. Whether sale of one asset, like the land along the tram route, to fund another asset, like the tram, is beneficial or not would require rigorous analysis of the particulars of each case.

The claimed creation of jobs is not necessarily beneficial to the ACT. Some of the jobs may be filled by residents of Queanbeyan, Goulburn or Yass. If jobs are filled by Canberrans who already work elsewhere, then the goods or services that they used to produce in their previous jobs will no longer be available to the local community.

Unemployed Canberrans who accept tram jobs will gain from wages, but the benefits of their leisure time, including gardening, volunteer community work, child-minding, etc, will be lost.

What a pity the current ACT government didn’t conduct a rigorous and credible cost-benefit analysis before being seduced by the romance of rail. An incoming ACT Liberal government would do well to look at the realities, rather than allow themselves to be tied to the tracks by political friends or foes.

This piece was first published on The Canberra Times.