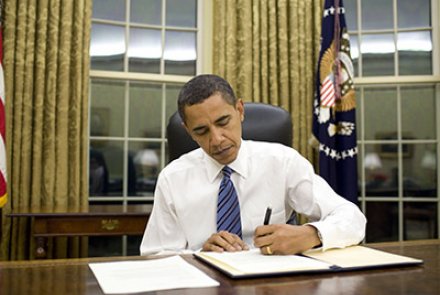 History favours those who write it

Mitzi Bolton is a PhD Student at Crawford School of Public Policy, The Australian National University, and a Senior Policy Officer at the Victorian Environment Protection Authority. Mitzi is driven by the question, ‘will you be proud of the future you pass on?’

How to measure impact
We need to recognise there are few ‘eureka’ moments where research transforms policy.

Does academic publishing provide an opportunity for leaders seeking to preserve their legacies and avoid being cast out into the wilds of policy and political irrelevance? Mitzi Bolton argues that it might, with Obama setting an example others may follow.

In the final months and days of his Presidency, Barack Obama took a novel approach to preserving his legacy: publishing open access academic papers on what his administration has achieved. Whatever your view of Obama’s time in the Oval Office, this commitment to ensuring his actions remain on a public, arguably non-partisan, record brings new meaning to the academic phrase ‘publish or perish’.

On 2 August last year, just three months before the US election, Obama authored a piece on the progress to date of US Health Care Reforms and suggested next steps. On 5 January, the Harvard Law Review published a commentary from him on the role and opportunities for US Presidents with regard to Criminal Justice Reform. A day later, another piece he wrote was published in The New England Journal of Medicine on the perils of repealing the Affordable Care Act – his signature health piece – without a replacement piece of legislation. Most recently, a piece was published in Science on the irreversible momentum of clean energy in the USA.

The latter pieces detail his policies and achievements, but also sound a three-fold warning to President Trump and the Republican Congress. Firstly, that they are responsible for all citizens. Second, that repealing policy without alternatives in place may be quite damaging to the United States, and third, regardless of a politician’s policy platform, some things may already have a momentum of their own that cannot be undone. More on this:_MG_3494 Is academia failing society?

Retaining a sense of credible authority over a policy position or approach is not easily achieved out of office, yet Obama appears to be setting himself up to do just that. The August paper has already been cited – the academic equivalent of a retweet – 51 times. In this way, Obama is facilitating other respected individuals and institutions to continue to highlight his legacy. It also enables him to continue to frame these issues with his messaging even from outside the Oval Office.

This foray of politicians and politics into academia in the dying days of office is rare. Neither President George W Bush nor President Bill Clinton published original material in academic literature while in office, although both republished or adapted a number of speeches while in office, and when campaigning to be (re-)elected as President. For example, Clinton published his health reform and education vision while Governor of Arkansas. In Australia, former Prime Ministers have similarly had speeches published and pieces in magazines while in office, but there is very little in the way of peer-reviewed journal articles.

Peer review is a critical component in academic literature. The objectivity that is introduced through having an anonymous expert in the area critique what an author proposes can help deliver credibility, providing a basis on which to further societal understanding of ideas and develop robust policy. The journals Obama printed in all utilise peer-review, ranging from discretionary peer-review for ‘commentary pieces’ to blind peer review by multiple reviewers.

Another key factor in Obama’s recent pieces is that they are all open access, meaning anyone with Internet access can see them without charge – a big deal in the world of pricey, pay-walled journals. This type of access is critical to the public and to policymakers, and it ensures that the ability to weigh up evidence and see academically-rigorous work is not restricted to the ivory towers of elite academia. As a result of this, the ability to question or build upon what Obama said with confidence, is open to all, limiting the scope for misinterpretation or post-truths.

In an era where achieving bipartisan support for policy seems ever harder, and its longevity, once passed, anything but certain, Obama’s approach may well be one that other leaders follow. Articulating the benefits of extant policy in a non-partisan way might just be the way to breathe new life into it. Once recorded in a published paper it can’t be repealed, it can’t be archived, and it can’t be forgotten, but it can be seen as credible and objective and thus be highlighted anew in other forums.

Time will tell if it is an astute way to preserve a legacy, a desperate grasp at the few remaining tendrils of power, or merely political gameplay. At the very least, it may be a clever mechanism to slow the revolving policy door by drawing attention to the benefits and rationale of what has already been implemented. In doing so, it can provide an opportunity for those who follow to build on rather than demolish what has been achieved to date.