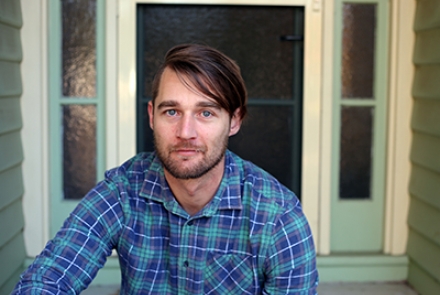 Infinite hoops in life and quidditch

His journey to NSC has been full of adventures in different directions.

From living off the grid in the Australian wilderness to studying theology and then starting a band - today James finds himself philosophising security studies and playing lots of quidditch.

Along with quidditch, his other hobbies include “birdwatching in the form of squealing inordinately at cockatoos and ignoring problems until they get much worse.”

We met up with James to get a glimpse into his journey from ascetic bush-dweller to security scholar.

1. You started out as a student in theology and now you’re researching national security studies? Is there a link? How did it all begin?

The long version is that I left high school with not much hope, I had no ATAR or anything like that. After high school, I lived in a shack for a few years in the middle of nowhere. At the time I didn’t want to go to uni – I had a pretty dim view of it, I just thought it was a glorified trade but eventually I realised I did enjoy society enough to take part in it. So I went and studied theology. It was a really unique program. In a strange twist the Anglican Church of Newcastle paid the University of Newcastle to run theology in a secular way, so anyone could do it and it was not so much focused on religion, but more philosophy of religion. I ended up doing Honours because I could. Then I started a band.

Are you still in the band? What did you play?

No. I sang and played guitar. We were like The Bends/Ok Computer era radiohead, maybe. We went well for a few years, but then all at once things fell apart. My relationship broke down, my dad was diagnosed with terminal cancer and other key members of the band decided had problems and opportunities of their own. It was a really difficult time. It made me go “oh shit, what I am going to do?” I don’t want my dad to die with me just mourning a band. I was good enough at uni so thought I’d try out academia.

I’m grappling with the question “what is security?” My Honours thesis was about a German guy who was very Christian and pacifist and then decided he wanted to kill Hitler. That’s what sparked my interest in religious and political ethics and the intersection with politics. When I came here I thought I wanted to do something on security and religion and then I realised that there was no concrete understanding of what security studies is. So essentially my PhD asks, what is security studies? I don’t expect to find a definitive answer, but I think the current level of ambiguity is unacceptable. People live and die over it so we should be able to define it better.

3. Tell us about your involvement in quidditch. Why did you get involved with it?

Obviously it’s a bit of a laugh – at the time I got involved not because I liked Harry Potter but because I was chasing a girl. The way the story ends is that we broke up but I continued to play because I love that the sport teaches you about people. It’s mixed gender and a very inclusive community, so although I started it as a way to connect with her, I realised it was an opportunity to connect with so many people I wouldn’t otherwise meet. When you play basketball everyone’s a tall guy just like me, but in quidditch it’s more diverse. In a community like that there is a real chance to understand, and be understood by the full depth of the community. By the time I started to move into leadership roles with the sport, like coaching the ANU quidditch team, I saw how that world intersected with my interest in philosophy and ethics.

I think people generally are trained to get along and put their differences aside, but I think there should be a world where we put our differences together and build something great, something bigger than the sum of our parts. Quidditch is a great opportunity for that.

The best example I have is that there were two players from the ANU team that were selected for the National team. One of them was myself (tall white guy) and the other person was a five-foot-two Singaporean girl with a background in badminton. Considering Quidditch is full contact, people are often surprised we could play on the same team, but she is very fast and agile and she can do all sorts of things that I can’t do. That’s the way society should be – differences being embraced. For me it’s a form of escapism, but also a proving ground of sorts; it’s the perfect world that I want to build, ad a bit of a break from the one I want to change.

4. You say that one of your hobbies is ignoring problems until they get much worse. How does that go in academia?

I think a lot of people expect that’s a pretty common trait in academia, though I suppose I’d prefer to see it as falling in love with a particular problem, rather than ignoring the others. I have a feeling the best academics, the ones who contribute the most to the world can love a problem without hating the ones they ignore.

5. What’s the best thing about doing your PhD?

I don’t know. I should probably ask myself that question more often and feel better about life. I’ve thrown myself into teaching and that’s something I really enjoy – to help people fall in love with problems. My favourite thing has been to ask a question for which I have no idea what the answer is. I love constantly learning.

**6. What’s your advice to students who don’t have the perfect ATAR or who are confused about what to do next? ** My advice would be the same to anyone, no matter what context – there’s always room in the world for people who are passionate about what they do. People get told that they have to get a good ATAR and go to the best university, but then at the same time they also get told life doesn’t end with a bad ATAR, as long as you’re happy, that sort of thing. I think people are loaded up with this all-or-nothing expectation, and that stops them from being comfortable in the middle ground. People get caught in this chasm of “what am I going to do?” instead of actually interacting with the world.

Which is a shame, because I think it is far more about how you live, and not about the decisions you make at all. As long as you are passionate, doing something that you’re passionate about and you’re doing it to the best of your ability, there is always going to be a spot at someone’s table for you. In life you can get really good at making arbitrary decisions and jumping through arbitrary hoops… or you can get really good at bringing your best to any situation. That passion and care will always be useful to someone, and make a positive impact on the world, and without that passion, any hoops you jump through will just bring about more hoops. Passion brings change, but hoops are infinite.

ANU Quidditch is open to all staff and students – if you would like to find out more get in touch with James or ANU Quidditch.

Inspired by James’s story? ANU College of Asia & the Pacific offers a huge variety of study opportunities and extra-curricular activites. See for yourself at ANU Open Day.