Home » News and events » All stories » Building a better future 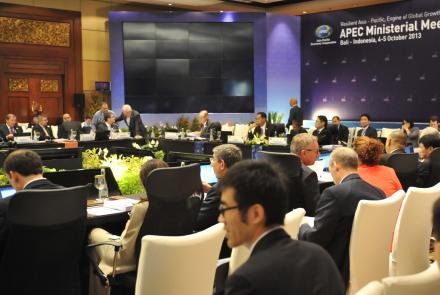 Dr Shiro Armstong is a Research Fellow and Co-Editor of East Asia Forum. Shiro’s areas of expertise include International Economics and International Finance and Government and Politics Of Asia and The Pacific. He currently teaches Masters Research Essay (IDEC8011).

Infrastructure investment is crucial to the delivery of service in emerging and less developed economies, writes SHIRO ARMSTRONG.

Indonesia wraps up its hosting of APEC in Bali this week. The last time Indonesia hosted APEC was in Bogor in 1994 from which APEC was given the vision that has guided its work and progress to date, the Bogor goals of free and open trade and investment in the Asia-Pacific by 2010 for industrialised economies and 2020 for developing economies.

Attaining the Bogor goals for the developing countries of APEC and for the region as a whole is one of the three issues that Indonesia has focused on in APEC this year. The other two are sustainable growth with equity and promoting connectivity. There has been most progress on connectivity, with significant new initiatives relating to infrastructure investment.

With a fragile European economy and slow recovery in North America, Asia’s emerging economies are expected to be an engine of growth for the global economy. The largest emerging economies in Asia face their own growth challenges, and there is increasing recognition that boosting Asian growth requires new collective regional effort to deepen economic integration.

One of the biggest challenges in the Asia-Pacific region is in delivering the infrastructure projects to support sustainable growth. That is the same in the advanced economies where economic slowdown and hypersensitivity to fiscal debt have meant infrastructure maintenance and new projects have not been brought to market. In the emerging and less developed economies, infrastructure investment is crucial to the delivery of services, for allowing new entrants to the workforce to get decent jobs and for established firms as well as new players to join the regional and global supply chains by reducing trade costs. But the regulatory environments in developing countries, and the institutions needed to give confidence to infrastructure investors, is weak or totally lacking.

The Asian Development Bank calculates that Asia needs US$8 trillion in infrastructure investment by 2020. Many economies in Asia have high savings but they are not put to best use within the region and are still significantly intermediated in New York and London, more often than not for investment in the advanced world. Asia’s large foreign exchange reserves have also not been put to productive use.

Bond markets in the Asian economies are underdeveloped and thin, often limited to government bonds, and the regional bond markets are only in the early stages of development. Capital markets are shallow and there is much work to be done in deepening them to fund long-term projects. International agreements cannot deliver the in-country financial market upgrading and reform which are needed to change all this.

The mode of cooperation that APEC promotes requires self-enforcement and delivery. The fact that there is no supra-national regional institutional authority that might legally bind APEC members to particular courses of action is sometimes seen as a weakness. On the contrary, this is a strength of APEC, as the tough structural reforms that the sovereign member economies need to make cannot be negotiated internationally and enforced from the outside but have to be driven by domestic coalitions for reform if they are to be sustainable. Regulatory and other reforms that make it attractive for pension funds, equity funds and other private capital to participate in meeting the huge demand for investment in Asian infrastructure, where returns are high, have to be put in place through domestic commitment. But international cooperation (the APEC way) helps substantially, through experience-sharing, demonstration effects and peer pressure.

Part of the solution to the shortfall in infrastructure investment is through public-private partnerships (PPPs). Indonesia has announced and will host a pilot PPP centre with an expert panel to enhance capacity to deliver bankable projects in the Asia Pacific. This mechanism will bring together national, regional and international financial institutions. Indonesia will also launch flagship infrastructure projects that will give PPPs and other funding mechanisms momentum through the demonstration effect of what is required in terms of a robust institutional framework, to get high profile pilot projects off the ground.

Indonesia has worked painstakingly with its partners in APEC (and globally) to promote the infrastructure investment agenda. At the beginning of Indonesia’s host year Indonesian ministries, led by Foreign Minister Marty Natalegawa, brought together a group of experts and business people mobilised through the East Asian Bureau of Economic Research to map out the goals and the vision that the APEC Summit is now delivering.

Playing into this space, China’s president, Xi Jinping, has announced the creation of an Asian Infrastructure Investment Bank which will fund infrastructure projects in developing countries and focus on connecting the region together. Initial funding will come from China but the initiative will attract complementary support from other sources in the region.

This Chinese leadership in providing regional public goods is a most welcome development. It is a timely and generous play into Indonesia’s APEC year. As China hosts APEC in 2014, the proposal can evolve and develop.

Infrastructure investment is a top priority for Indonesia, for sustaining growth and connectivity within Indonesia, and between Indonesia and its regional neighbours. It is an issue that Indonesia has been able to carry forward in APEC consistently with its ambitions for the ASEAN Economic Community and ASEAN’s connectivity. It has also been its champion in the G20. The connection between the regional and global agendas reinforces the work at both levels and strengthens both forums.

Bogor gave APEC a common and uniting vision in 1994. Bali may prove another turning point in regional cooperation with Indonesia’s forging the connection between the G20 and the regional agendas — also a bonus for Australia’s hosting the G20 in Brisbane next year.

This story was originally published on the East Asia Forum: http://www.eastasiaforum.org/2013/10/06/indonesia-connects-apec-to-regio...