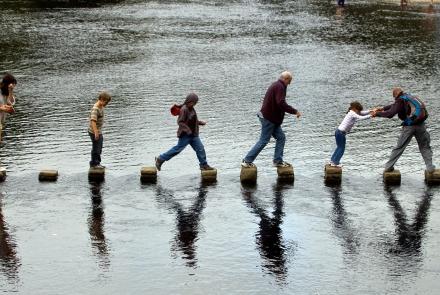 The unkindest cut
Will cuts to social security lead to higher poverty and increased inequality?

We need to have an informed debate about who wins and who loses from tax and welfare reform, writes Peter Whiteford.

A rising tide lifts all boats, they say.

Looking back over the fortunes of the Australian economy in the last four decades, you could be forgiven for thinking the saying might be true.

The reality for those in the welfare system, though, is that some have coasted on the high seas of prosperity, while others floundered in increasingly heavy weather.

Since 1993, Australia has been one of the fastest-growing advanced economies in the world, enjoying 21 years of unbroken growth.

The benefits of this growth in income appear – at least on the surface – to have been widely shared. Although the poorest 10 per cent of households haven’t done as well as higher-income households, their real disposable incomes are now more than 40 per cent higher than they were in 1995. Middle-income households are more than 50 per cent better-off.

Although it may be unwise for any politician to say it, it remains the case that most Australians ‘have never had it so good.’ However not everyone has benefited equally.

Inequality in disposable incomes – after taxes and welfare benefits - increased significantly up to 2008, and the richest 10 per cent of Australian households enjoyed the highest real increase in their incomes of any OECD country.

Since 2000, however, inequality of market income (from wages, self-employment and property and investments) has fallen, mainly because of increased employment and earnings among lower income households.

But if market income inequality has fallen, why has disposable income inequality risen? The answer – by definition – is that Australia’s redistributive system of taxes and welfare spending has become less effective at reducing inequality.

Combined with Australia’s income-tested social security system, rising employment below the median income meant that the welfare safety net contracted during the period of high-income growth.

Good times and reform meant that from the early 1990s onwards there was a very large reduction in the share of working-age people who relied on government benefits for their main income.

But, as the social security system contracted, it also became less effective at reducing inequality.

For people of working-age a further important factor in this contraction of welfare was the decision to continue to link payments for the unemployed to the consumer price index rather than to wages and household incomes. As a result, the incomes of people receiving unemployment payments stayed the same in real terms during a period of unprecedented real income growth.

In contrast, from 1996 pensions for the aged, people with disability, carers and parents were linked to wages, so that to a much greater extent these favoured groups did share in the benefits of economic growth.

In the mid-1990s a single person receiving Newstart would have been about $10 per week (in current terms) below the 10th percentile of the income distribution. By 2011–12 they would have been close to $160 per week below that percentile. What we are seeing is the continuing impoverishment of the unemployed.

So most - but not all - Australians have just lived through a period of exceptional growth in prosperity. But as the Dog Days loom, are we ready to face the challenge of slower growth in living standards??

This challenge coincides with the desire to balance the budget, and the scale of the Federal Government’s fiscal challenge has been a notable theme since the election.

How equally should the costs of adjusting to lower growth and balancing government budgets be shared across Australian households? It is worth noting that Australia has the most targeted social security system in the OECD. As a result, the OECD has estimated that across the board, cuts in social security spending would increase inequality in Australia by more than any other OECD country.

The impact of this will be accentuated by the decisions of successive governments to move parents from the parenting payment to Newstart once their youngest child turns six (if partnered) or eight (if single).

On top of this, family tax benefits are now indexed to prices where once they were effectively indexed to wages. The inevitable outcome will be to reduce the effectiveness of family payments in reducing poverty and inequality.

These and related trends pose the risk of residualising social security recipients and fundamentally changing the nature of the Australian social security system. Working-age welfare recipients are increasingly being seen as the undeserving poor. In effect, we are saying to many working-age recipients that they will never enjoy the future improvements in living standards that the rest of Australia will enjoy. We are also saying this to the children of parents moved onto Newstart.

It remains true that the best form of welfare is to get a job. But not everyone can get a job. The rising tide of employment has lifted many but not all boats: a small minority have remained jobless, as welfare recipients, for much of the last decade. While the size of the group in this position appears to have shrunk, its distance from the mainstream has widened.

Given the projected size of the budget gap in coming years, it seems sensible to consider all options on both the spending side and the revenue side. Reforms that encourage labour-force participation can also help by maximising the number of taxpayers relative to the number of people requiring support. Most importantly, it will be necessary to have a well-informed debate about who wins and who loses from welfare and tax reform.