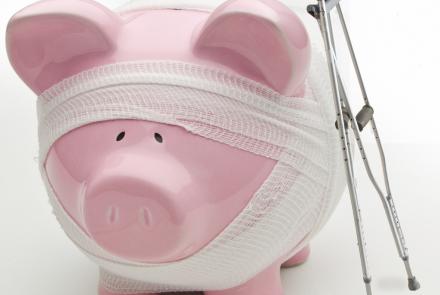 Robin Hood and the piggy bank

As a tough federal budget round looms large, there has been suggestions that the pension eligibility age could rise to 70, indexation of pensions could be changed, Family Tax Benefit Part B could be more tightly income-tested and eligibility for Disability Support Pension for younger recipients could be reviewed.

While some of this is “kite-flying” from the Abbott government, it seems very likely that welfare changes will figure significantly in the May budget.

How Australia stacks up globally

Australia’s spending on cash payments is the sixth-lowest among the wealthy countries that are members of the OECD, at 8.6 per cent of GDP in 2013. The main reason for our low spending is that in Australia, cash benefits are flat-rate entitlements and are income-tested and asset-tested.

In contrast, in other rich countries apart from New Zealand, social security benefits are related to past earnings and contributions and can be higher for high income earners than for the lower paid.

Despite our obsession with “middle class welfare”, Australia has the lowest level of middle class welfare in the developed world in terms of annual social security spending. As a result of income-testing, Australia has the most progressive distribution of cash benefits in the OECD, spending 12 times as much each year on the poorest 20 per cent of the population as the richest 20 per cent, a ratio close to six times the OECD average.

In fact, the OECD estimates that because Australia has the most progressive distribution of social security benefits, across the board cuts in welfare would increase income inequality more than in any other country. This suggests that cuts in social spending should be carefully analysed to assess their impact on income disparities.

Objectives of the ‘welfare state’

Economist Nicholas Barr has pointed out that welfare states have two main objectives. One can be described as “taking from the rich to give to the poor”, what Barr calls the “Robin Hood” motive. Australia is the strongest example of a country emphasising this approach.

In most countries, the more important objective of social security is to provide insurance against risks like unemployment, disability and sickness, and to redistribute income across the life course to periods of greater need (for example, when there are children in the household) or to periods of lower incomes (such as in retirement). Barr describes this as the “piggy bank objective”.

While Australia practises “Robin Hood” social policy more than any other country, our social welfare system also acts as a piggy bank and an insurance company.

Since 2001, Australia has had a new source of data to provide information on people’s use of welfare (among other things) – the Household Income and Labour Dynamics in Australia survey, commonly known as HILDA. HILDA identifies the prevalence of social risks at a point in time, but most importantly it provides information on the likelihood of risks affecting individuals over time.

As any insurance salesman will tell you, in our lives we are vulnerable to risks. In addition, the longer the timeframe we look at risks, the more common they become.

Exposure to risks has consequences. Around 3 per cent of the population have a major worsening in finances each year and 10 per cent over four years. Between 2001 and 2008 – exceptionally good years for the Australian economy - just under half the adult population experienced an income drop, with around one-fifth having a major income fall.

When incomes fall, the social security system steps in. HILDA shows that around one in three working-age persons lived in households where someone received a welfare payment – not including family benefits or age pensions – at some time during 2009, down from 37 per cent in 2001.

Over the period between 2001 and 2009, roughly two-thirds of the working age population lived in a household where someone received an income support payment at some point in time.

That a significant majority of Australians use the welfare system at some point in time reflects the fact that we are all exposed to risks, and need to dip into the “piggy bank”. This is what the post-World War Two social policy reformers such as Labor prime minister Ben Chifley called the “safety net”.

We often think of the welfare system as creating “dependency” and that all people on welfare stay there for very long periods of time. HILDA shows that while two-thirds of the working-age population received welfare at some stage between 2001 and 2009, only around 1.2 per cent got nearly all of their income (90 per cent or more) from welfare for the whole nine years. These people tend to have very complex combinations of disadvantages.

The fact that a large majority of Australians benefit at different times from the welfare state doesn’t in itself mean that welfare should or shouldn’t be reformed. But in considering any reforms, we need to ensure that we keep the multiple objectives of welfare in mind. Welfare reform can’t shift vulnerability to risk, but it can shift who pays for it.

This article was originally published on The Conversation: http://theconversation.com/robin-hood-and-piggy-bank-what-the-welfare-st...