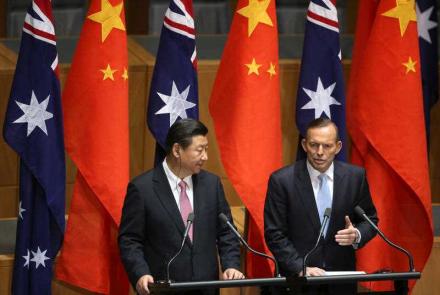 Australia and China after their free trade agreement

Australia-China ties
A new report outlines the future of the bilateral relationship.

The past week has seen big breakthroughs in Asia Pacific economic diplomacy. At the APEC summit, Xi Jinping and Shinzo Abe broke the diplomatic ice in the China–Japan relationship.

The United States and China paved the way towards extending the successful International Technology Agreement through the WTO. They also did a game-changing deal that will entrench deep cuts to carbon emissions through to 2025–30. China brought trans-regional (as opposed to Eastern and Western Pacific) integration back to centre stage in APEC’s quest for open regionalism. And in Brisbane, the G20 summit has crafted a global recovery strategy around broad-based cooperation on productivity-enhancing reforms and infrastructure investment, re-focused on the WTO and brought climate change back into play.

At the edges of the APEC meeting, China also moved to conclude free trade deals with South Korea and Australia, for both of which China is already the largest trading partner by far.

The conclusion of the Australia–China free trade agreement during President Xi Jinping’s state visit to Australia this week represents a major step forward in the bilateral relationship. The agreement will serve to deepen integration between the two economies, with substantial efficiency-enhancing liberalisation of trade, services and investment flows. It could also provide a pillar on which to anchor a much broader economic and political relationship that recognises the countries’ common interests in regional and global affairs.

Australia’s Trade Minister Andrew Robb had put priority on wrapping up the free trade agreement with China for a number of reasons. It was the last of the three big deals outstanding when the Coalition government came to office — settling with China after doing deals with South Korea and Japan delivered the trifecta. It sorted out anomalies in our huge trade relationship with China that were a hang-over from China’s deals with ASEAN, New Zealand and Chile, Australia’s competitors in important Chinese agricultural commodity markets. In this sense the new agreement serves to correct the discrimination that had crept into our dealings with China because of the preferential deals that others had secured. It also provided opportunity to address the tangle that both the present and former Australian governments had got into over Chinese investment in Australia, and build a more confident and beneficial investment relationship — though there are still issues about SOEs to be sorted out on China’s place in Australia’s foreign investment regime.

The agreement is a significant outcome from President Xi’s visit to Australia and the Australian government’s commitment to get the deal done. That it is being cast as a ‘living’ agreement, one that will incorporate review and extension as the commercial relationship between the two countries continues to evolve, though it signals that all issues haven’t been resolved at the first step, does not qualify the achievement.

Yet, there are many elements in the rapidly evolving bilateral economic relationship between the two countries that cannot readily be enfolded in a traditional free trade agreement of this kind and go well beyond its province, however open-ended its negotiation over time.

Indeed, while the agreement improves market access and commercial treatment at the margins for both parties, the real foundations of China’s economic partnership with Australia and its partners around the world, including the United States and Japan with neither of whom it has such a preferential bilateral trade agreement, or ASEAN and South Korea with whom it now does, are multilateral and global in character.

How are we to judge this achievement in economic diplomacy alongside the uncertainties that persist in Australia’s broader dealings with China? Australia’s recent demurral from signing on to the development of the China-instigated Asian Infrastructure Investment Bank left many in the region wondering about both the rigour and the independence of Australia’s assessment of its national strategic interests, and the US President needing to re-assert the consistency in his country’s rhetoric on the US–China relationship. These can be accepted as momentary fumbles and open — as Australian Prime Minister Tony Abbott has said — to further consideration, but they raise questions about the big strategic setting in which this latest step forward will have impact big or small.

As leading Chinese analyst, He Fan, says in this week’s lead essay, Australia is in fact well placed as an important player in the surge of strategic diplomacy around China’s new place in the world. The question is how can Australia leverage more out of its close economic relations with China?

The world trading system is undergoing a complex and difficult transition. What worries China most in this process is the threat of a backlash against globalisation in our region. Australia, with its strong record of support for trade liberalisation and open regionalism in Asia, can help guide China and other countries through these questions ‘as Asia’s dependable voice’ on the trade regime, in negotiation of a Regional Comprehensive Economic Partnership and in the WTO. And, following the most recent example of Indonesia, joining the AIIB still provides Australia with an opportunity to influence the direction and operation of that new organisation.

Australia also has an important role to play with China in the global theatre. When China assumes the presidency of the G20, Australia is strongly placed to help it get the right outcome.

This article was originally published in East Asia Forum.