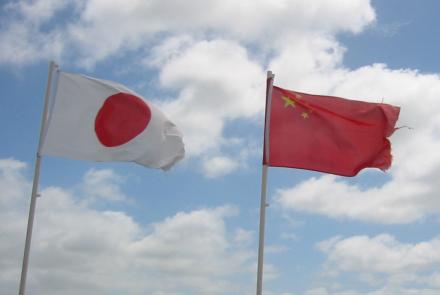 Abe’s fraught choice between China and the conservatives

The role of Japanese politicians like Abe lies in providing the political leadership necessary to mend this divide, writes Toshiya Takahashi.

The meeting between Prime Minister Shinzo Abe and President Xi Jinping at the 2014 APEC summit was a temporary relief for both amid rising bilateral tensions over the last two years.

This talk was the result of both governments’ efforts to repair the bilateral relationship, temporarily parking both the Senkaku/Diaoyu dispute and the history issue. Both leaders agreed to resume their strategic relationship, starting talks over the creation of a maritime crisis management mechanism and the expansion of economic cooperation. This is a moment of change in Shinzo Abe’s China policy, but actual progress in bilateral relations is unlikely, due to Japanese domestic politics. Abe’s supporters among the conservative political elites endorse his hard-line posture against China and would be an intractable constraint to any effort to restore sound bilateral relations.

Abe’s hard-line posture towards China over the Senkaku/Diaoyu islands and over the history issue has persisted since he became prime minister at the end of 2012. In the 2012 national election campaign, he denounced the Democratic Party of Japan’s (DPJ) China policy by saying that it was weak, promising hard-line policy to his conservative supporters both in the elite and the wider public. He has accelerated Japan’s defence preparation for the south-west (Ryukyu) island chain, as well as strengthening the US–Japan alliance. During 2013, he continued to suggest a revision of the 1995 Murayama Statement — a milestone for Japan as an officially documented apology for Japan’s wartime invasion of the Asian continent — though his attempt was later abandoned. His conservative posture culminated in his visit to the Yasukuni Shrine at the end of 2013, which provoked international criticism, including from the United States. Again, while Japanese public opinion was divided, his conservative supporters praised this tough stance.

Abe’s recent adjustments to his China policy should be seen in light of the clear practical needs of both Japan and China. The creation of the maritime crisis mechanism is urgently needed to avoid accidental military clashes. Deepening economic cooperation is also important for boosting their economies, and for expanding trade and investment.

Despite these practical merits, Japanese domestic politics may make it difficult for Abe to continue with this fragile mood of cooperation. The two thorny issues remain. Three days before the APEC summit, both countries announced a document called ‘Regarding Discussions toward Improving Japan–China Relations’, in which the two issues were included. However, from the viewpoint of Japanese conservative discourse its language is that of concession to China. For example, regarding the Senkaku/Diaoyu islands, the document de facto acknowledges the existence of a territorial dispute itself, which has been denied by recent official views in Japan. Over the history issue, Japan and China reached only an ambiguous concession, owing to their hawkish domestic politics. It states that ‘both shared some recognition’ to ‘overcome political difficulties that affect their bilateral relations’ for ‘the spirit of squarely facing history and advancing toward the future’.

The Abe government and the Liberal Democratic Party (LDP) in the last two years have emphatically rejected China’s claims on these two issues. The power of the moderate conservatives and liberals who formed the post-1972 China policy has declined within the LDP. A non-concessional posture over the Senkaku/Diaoyu islands became unchallengeable within the LDP, and visits to the Yasukuni Shrine have become a rite of the new conservative mainstream in the LDP.

The business community will welcome the summit agreement, but Abe’s change in policy will encounter a critical problem which is now difficult even for him to manage. He has strong conservative supporters inside and outside party politics, whom he and his ideological colleagues have nurtured by their provocative discourses on history and nationalism. They do not represent the majority of Japan’s public opinion, but they form the core of his political support group. His hard-line China policy has attracted and stimulated more emotional and nationalistic public opinion since regaining office in 2012. Emotional anti-China phrases are often observed online and in popular Japanese nationalist journals. For Japan’s nationalists, his policy change is a betrayal. It is a political risk for Abe to commit Japan further to this bilateral document.

The possibility of substantiating the commitments of the summit talk is still distant, but the key and more immediate solution is to moderate Abe’s conservative political backdrop. In Japanese political discourse, reserved and balanced views on the Japan–China relationship have been marginalised. Abe’s conservative language has caused a deep political divide, lessening the chances of balanced debate. Overcoming emotional discourse is the key to rescuing the relationship with China from further conflict. The role of Japanese politicians like Abe lies in providing the political leadership necessary to mend this divide.

This article was published in East Asia Forum: http://www.eastasiaforum.org/2014/12/02/abes-fraught-choice-between-chin...