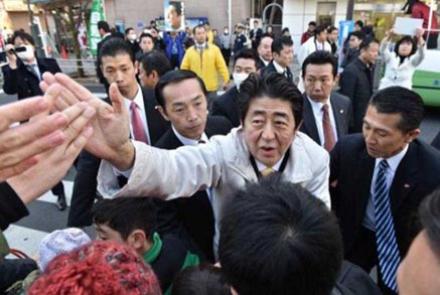 Ben Ascione is a PhD Candidate at Crawford School. He is Japan and Korea editor at East Asia Forum and a research associate of the Japan Center for International Exchange in Tokyo.

The incumbent Liberal Democratic Party (LDP) seems to be cruising towards a victory in the snap election to be held on 14 December. But beware of interpreting this as a ringing endorsement of Prime Minister Shinzo Abe. Instead, the likely result shows just how weak Japanese politics has become.

Prime Minister Abe’s decision to call the election two years ahead of schedule appears odd, especially given that the LDP–New Komeito coalition currently holds a two-thirds majority in the lower house.

But it was a calculated move by Abe to extend his political life. LDP regulations require an internal election among party members every three years for the position of party president (effectively the prime ministership assuming the LDP is in power at the time). Party presidents are also limited to two consecutive terms. So Abe is barred from extending his current stint as prime minister beyond September 2018. Winning an election later won’t buy him any extra time in office. And the snap election has caught the opposition parties off guard, leaving them with relatively little time to prepare election campaigns.

There are several burning issues that could see Abe’s public support falling further. Two unpopular policies are the restarting of nuclear power plants and the amending of relevant laws aimed at enabling the Japan Self-Defense Forces to exercise a limited right to collective self-defence, as outlined in the 1 July cabinet decision. Then there are the scandals surrounding the resignations of Economy Minister Yuko Obuchi and Justice Minister Midori Matsushima that emerged after the September cabinet reshuffle.

Calling the election now gives Abe the best shot at serving the full six years, despite its self-serving political rationale. Even if its majority shrinks, an LDP win seems all but assured for three reasons.

The expected low voter turnout will favour the LDP which has a party machinery finely tuned toward mobilising specific interest groups in the face of public apathy.

The opposition parties are in a state of disarray. The Democratic Party of Japan under Banri Kaieda have failed to offer a credible alternative vision to Abenomics, and its election strategy looks lost without Ichiro Ozawa who masterminded the party’s 2009 triumph. The LDP’s campaign slogan ‘economic recovery, there is no road but this’ (keiki kaifuku, kono michi shika nai) can be interpreted as a jab the opposition as much as it is an endorsement of its own policy. Serious hopes of a mature two-party political system, which were proclaimed five years ago, have evaporated.

Japan’s electoral districts have not been redrawn to reflect the fact that young workers have moved from rural to urban areas in search of jobs. This disproportionally increases the influence of the LDP’s traditional rural strongholds. A number of past elections, including the December 2012 lower house poll which brought Abe into power and the July 2013 upper house election which gave Abe’s LDP-New Komeito coalition control of both houses, were found to be ‘in a state of unconstitutionality’ for not upholding the equality of one person one vote. A single vote in Tottori prefecture was found to hold nearly 5 times the influence of a vote in Tokyo during the July 2013 upper house election. The number of seats in the lower house has been reduced from 480 to 475 in order to combat this, but the move pays mere lip service to the problem, and the imbalance still favours rural areas. The Supreme Court, for its part, and despite its ruling, has refused to invalidate results. This gives the LDP little incentive to act further.

Abe is considered the most successful prime minister since Junichiro Koizumi. He has achieved this simply by virtue of holding onto power for an entire second year. He ended the political merry-go-round that the prime minister’s office had become, with six prime ministers in the six years since Koizumi stepped down, before circling back to Abe. But achieving this shallow measure of political stability will have been in vain if policy progress continues to remain deadlocked after the election. Abe will need to choose wisely where to spend his political capital.

Economic revitalisation is what the public demands. This means pushing ahead with all three arrows of Abenomics (fiscal stimulus to boost immediate spending, monetary easing to reverse deflation and structural reform to revitalise long-term growth). While Abe has executed the politically easy first two arrows, he has stepped back from the third arrow in the face of LDP interest groups. It is here that his limited political capital would be best leveraged. In particular this means overhauling labour laws to promote mobility and addressing the difficulties faced by the underclass of temporary and irregular workers; liberalising inefficient protected sectors such as agriculture and pharmaceuticals; reducing behind the border barriers which impede foreign investment; and addressing the barriers, both formal and informal, which inhibit women’s participation in the workforce.

If Abe expends political capital on restarting nuclear power plants and on implementing collective self-defence before any economic fruits are borne from the third arrow, the prime ministerial merry-go-round may start up again sooner rather than later.

This article was published on East Asia Forum: http://www.eastasiaforum.org/2014/12/07/snap-election-belies-japans-weak...