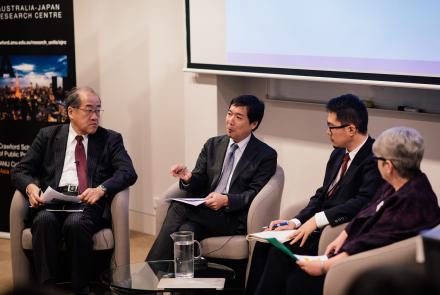 Japan is confronted by a rapidly ageing and declining population, a reality that poses significant challenges for the future.

Can Abenomics revive the economy after two decades of mediocre growth? Are Japan’s science, energy and technology innovation policies effective? And given the dynamic shift in the global and regional order, is Japan’s foreign policy adapting to reflect this?

A panel of leading experts from Japan tackled these questions at a major public forum hosted by the Australia-Japan Research Centre at Crawford School.

Professor Kyoji Fukao of the Institute of Economic Research at Hitotsubashi University, presented his latest research on the influence of innovation on productivity, and Japan’s place in the international economy. He examined the underlying reasons for Japan’s economic stagnation and recent steps by the Abe government to get the economy back on track.

Is it an uphill battle to achieve substantial GDP growth after two decades of poor performance?

Professor Fukao believes it’s “too early to give up on GDP growth.” With labour productivity at only 60 per cent of that of the US, there is room to improve Japan’s productivity and income levels.

Professor Hideaki Shiroyama, Dean of the Graduate School of Public Policy at the University of Tokyo, addressed Japanese science, and energy and technology innovation policy, emphasising that effective collaboration between universities and industry partners would contribute to more evidence-based policy-making.

Japan’s foreign policy, with an emphasis on Southeast Asia, was the focus of Professor Nobuhiro Aizawa’s presentation. He said “The winning formula involves Japan and China cooperating”, adding that there is potential for cooperation between the two countries on initiatives in Southeast Asia. Natural disaster infrastructure is one example; excluding Japan or China from projects in Southeast Asia is risky for everyone involved, and it would create unnecessary political tension.

Senior government officials, academics and students participated in the forum’s Q&A discussions, chaired by Professor Veronica Taylor, Dean of the College of Asia and the Pacific. Conversation kept flowing, with panellists continuing discussions with audience members at a reception following the public forum.