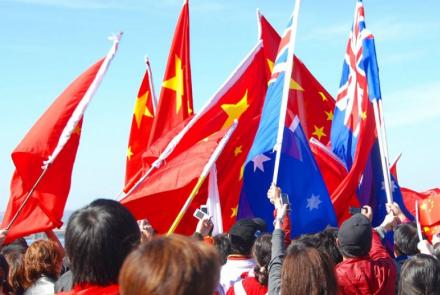 Image by Pierre Pouliquin on flickr.com

Peter Drysdale is Emeritus Professor of Economics and the Head of the East Asian Bureau of Economic Research and East Asia Forum at Crawford School of Public Policy. He is widely recognised as the leading intellectual architect of APEC. He currently teaches the graduate course International Policy Studies and Placement (CRWF8018).

Crawford School’s Professor Peter Drysdale is to lead the first major joint study of the economic relationship between Australia and China has been launched in Beijing.

Launched in Beijing on Saturday, the joint study will be led by Professor Drysdale and Mr Zhang Xiaoqiang, Executive Director of the China Center for International Economic Exchanges (CCIEE) and former Vice Minister of China’s National Development Reform Commission.

The study will examine the medium to long-term prospects for the economic relationship and follows the signing of the China-Australia Free Trade Agreement and the changes in the strategic trade in resources between the two countries.

Chinese experts are expected to include Professor Yiping Huang of the National Development Studies Centre at Peking University, who is an expert adviser to China’s Monetary Policy Committee, and Dr Zhang Yunling of the Chinese Academy of Social Sciences.

Professor Drysdale, from the East Asian Bureau of Economic Research said the joint study was the first of its kind between Australia and China.

“An important objective is to forge common understanding of the dynamics of change in the relationship. This is a critical moment in a once-in-a-century economic transition,” he said.

“It is a vital opportunity for both countries to think about how to shape the future course of our relationship, establishing some common reference points in its management.

“The study will look at opportunities for cooperation between Australia and China bilaterally, but also in the region, for example through the Asian Infrastructure Investment Bank initiative, and globally in the G20.”

The independent academic study will be partly funded by business and has support from the Australian and Chinese governments.