Home » News and events » All stories » Why Thailand must decentralise 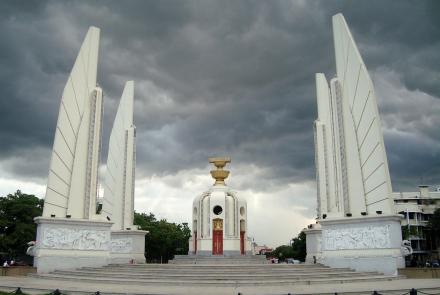 Why Thailand must decentralise

Peter Warr is the John Crawford Professor of Agricultural Economics. His research includes the Indonesian and Thai economies, especially the relationship between economic policy and poverty incidence.

Bangkok’s iconic Democracy Monument is currently fenced off. A large, hand-written sign reads ‘closed for renovation’. In April the monument was damaged by shots fired at protesters demonstrating against the Pheu Thai government of Yingluck Shinawatra. At least three protesters died.

Ironically, Thai democracy is itself ‘closed for renovation’. On 22 May a military coup claimed power, for the 12th time since the 1930s. Yet again, a familiar cycle has been acted out: a military government gives way to a democratic opening, there are violent protests against the elected government, the military stages a coup to ‘restore order’, an authoritarian military government promises ‘reform’ and a later return to democracy, and so on.

Thai democracy is seemingly unstable, but why?

The new military junta’s program of ‘reform’ is still unclear, but the central focus is apparently on reducing corruption. Successive Thai governments have been known for their corruption and protests against the allegedly high level of corruption within the Pheu Thai government was a focus for at least some of the popular movement against it. Corruption wastes public resources, contributes to inequality and is an important source of public discontent. Reducing it is clearly desirable. But although corruption is a problem, it is not the problem. The focus on this one issue misses a key feature of Thailand’s political instability — its regional nature.

The Pheu Thai party of Thaksin Shinawatra and his followers derives its strength from the rural-based North and Northeast regions of the country, where it has won huge majorities in every election this century. Pheu Thai has never won an election in Bangkok and its support in the South is only slight, where the opposition Democrat Party wins most elections and minor parties win the rest. But the population and parliamentary representation of the North and Northeast regions are so large that Pheu Thai’s popularity there is sufficient to capture government at the national level.

This regional divide has been acted out in street protests in Bangkok and elsewhere. During the Democrat Party government led by Abhisit Vejjajiva, from 2008 to 2011, protests by the ‘Red Shirt’ supporters of Pheu Thai were primarily people who either normally resided in the North or Northeast, or whose families had recently relocated from there. During the more recent anti-Pheu Thai protests, led by former Democrat Party deputy prime minister and leader of the People’s Democratic Reform Committee Suthep Thaugsuban, the demonstrators were overwhelmingly from Bangkok and the South. Regional differences lie at the heart of Thailand’s political conflict.

Thailand’s major problem is the incompatibility of a regionally divided populace and a highly centralised government. It is not exaggerating too much to say that attaining government at the national level is a winner-takes-all victory for either the North-Northeast coalition or for Bangkok and the South. Only one long-term solution is seemingly possible — political decentralisation to empower and democratise regional governments. Thailand needs more democracy, not less.

At the end of the 20th century, Indonesia was hardly a promising candidate for a successful democracy. Decades of highly centralised, authoritarian government under President Soeharto had ended with collapse of the government under violent street protests. But something remarkable subsequently happened. A radical decentralisation was implemented. Some say it was too radical, but Indonesia’s democracy is now the success story of Southeast Asia. The country has now experienced a most unusual event: the loser in a presidential election has grudgingly accepted defeat and walked away.

Indonesia’s decentralisation did not remove corruption. It probably increased it, as checks and balances have been undermined by the huge task of monitoring disbursement of funds at the regional level. But the contest for control of the central government is no longer the sole political struggle. Regions not close to the central government’s ruling elite can still exercise a substantial degree of autonomy, with considerable resources at their disposal. This is not so in Thailand.

Significant decentralisation is not included in the Thai military government’s understanding of ‘reform’. The policy package being proposed apparently contains no such measures. It may be too much to hope that a group of command-and-control generals could implement a decentralisation of power, even if they wanted to. They are doing the opposite. The budget allocated to local governments has been halved, on the grounds that local government is too corrupt.

The prognosis is not good. When the generals relinquish power and restore electoral democracy, as they must, more of the same seems probable: regionally-based conflict that an overly centralised system of government cannot resolve, except through repression.

This article was published on East Asia Forum: http://www.eastasiaforum.org/2014/09/22/why-thailand-must-decentralise/