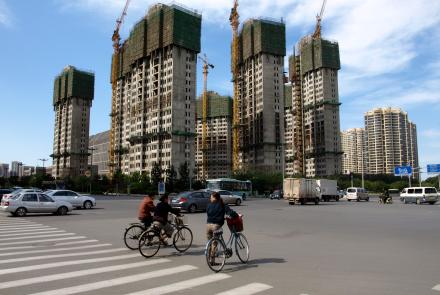 In October 2013, just before the APEC meeting in Bali, Chinese president Xi Jinping announced the creation of the Asian Infrastructure Investment Bank (AIIB). The bank will be launched this year, possibly when APEC leaders meet in Beijing.

This new development bank can help fill the vast unmet demand for productive economic infrastructure, especially in the emerging economies of Asia. In 2011, the OECD estimated that global infrastructure requirements over the next two decades will cost around US$50 trillion. Biswa N. Bhattacharyay, of the Asian Development Bank (ADB), estimates that developing Asian economies will need to invest US$8 trillion from 2010 to 2020, just to keep pace with expected infrastructure needs.

The supply of savings, much of which is generated in Asia, is more than adequate to begin to fill some of the demand for infrastructure. But not nearly enough of these savings are being channeled to finance economic infrastructure projects with promising economic returns. As Keshav Kelkar points out, the 2008 global financial crisis has diminished the lending capabilities of Western institutions. The World Bank’s lending has plummeted to half of its pre-global financial crisis levels. And, private lending for infrastructure has fallen to one-third of what it was before the crisis.

All Asia Pacific governments should welcome the initiative to set up the AIIB and the opportunity to participate in it. Their participation is not essential for the financial strength of the AIIB. China could have chosen to go it alone or could use the new BRICS bank, which is not open to any other Asia Pacific economy except India. But wide participation may help ensure that the AIIB can expand rapidly its lending to finance badly needed infrastructure projects while ensuring high quality project preparation and execution.

The Chinese government is determined that the AIIB should acquire and sustain its own AAA rating as soon as possible, rather than rely on a (perhaps implicit) underwriting of its capacity to borrow at AAA rates from international capital markets. The most efficient way to achieve this is to create synergy with existing multilateral development banks, especially the World Bank and the Asian Development Bank. These banks are not able to increase their contribution to economic infrastructure significantly, due to the political constraints on expanding their capital base and moving towards forms of institutional governance that reflect 2014 realities. But existing multilateral development banks have the expertise to help prepare high quality projects and attract the interest of institutional investors and sovereign wealth funds that are looking to improve their range of sound investment opportunities.

Tapping into the expertise of experienced development banks is the most efficient — and perhaps the only — way to build the capacity of the new bank to assess and implement a rapidly growing number of projects successfully. Widespread participation by governments who are also significant shareholders in the World Bank and the Asian Development Bank would maximise the potential for synergy.

China made it clear from the outset that any other government would be welcome to be a founding member and help ensure that the design and strategy of the new bank was consistent with best practice. The response has been mixed. The United States could have seen the new bank as an opportunity to help fill the yawning gaps in infrastructure in Asia and, potentially, all of the Asia Pacific. Instead, the feedback from all around the region is that the United States is discouraging others from participating in the AIIB.

Fortunately, the critical mass to launch the AIIB as an inclusive structure is already assured. And it is still not too late for the United States to become a founding member. Australia, among others, can help the United States to perceive the new bank as an opportunity to add a new constructive component to its pivot to Asia.

This article was published in East Asia Forum: http://www.eastasiaforum.org/2014/09/21/welcoming-chinas-asian-infrastru...