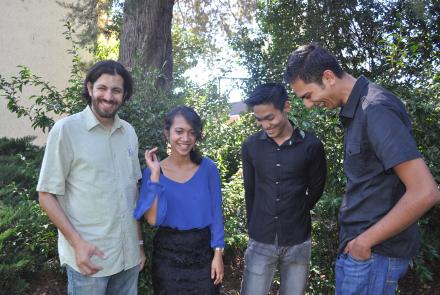 Five minutes to change the world

Tackling early education for the ten million children living in urban slums isn’t an easy task. But a team of five Crawford students are about to come up with a solution – and they only have five minutes.

Departing Australia in March, the Crawford School team will compete against top-tier universities to receive start-up funding (USD $1 million) from President Bill Clinton and the Clinton Global Initiative for the Hult Prize competition. They will have five minutes to convince the judges that their idea is worthy of the start-up funding.

The team is made up of Master of Environmental Management and Development students Olivia Dianina Purba and Thet Zaw, Master of Public Policy students Muhammad Farhan Akhtar and Xavier Flores Aguirre, and recent Master of International and Development Economics graduate Ashutosh Mani Dixit.

The annual challenge is the world’s largest student competition and start-up platform for social good. The Hult Prize Foundation is a program that gives entrepreneurs from around the world a platform to innovate and revolutionise the way society thinks about helping the poor.

Teams were chosen from more than 20,000 applications from over 500 colleges and universities in over 150 countries. This is the fourth year in a row that the ANU College of Asia & the Pacific has been represented in the competition. This is also the third year in a row that Crawford School has had strong representation at the Hult Prize, and the first year all team members have come from the school.

Team leader Olivia Purba said she and the team were looking forward to pitching their innovative idea.

“It is truly an honour to be representing ANU in China.

“We believe there are endless positive things we can do outside of the classroom and away from the books. This incredible opportunity will positively impact our academic and professional careers and will hopefully bring a great sense of pride to the ANU community if we win,” said Purba.

With only five minutes to impress a panel of judges, the team is eagerly preparing a comprehensive pitch about a sustainable and high quality early education solution for the ten million underprivileged children under the age of six who are currently living in the world’s urban slums.

“Our idea is to unlock creativeness in communities by establishing MoboKiddo. This looks at addressing early education barriers and utilising interactive educational activities inside a vehicle - utilising elements of peer-to-peer learning and traditional games,” said Purba.

The team credits their success to the world-class education they received at Asia and the Pacific’s leading public policy school.

“At Crawford School we have been so lucky to learn from lecturers and peers on how to think critically, develop the best practises of policy and to analyse complicated real life situations. We believe our sharp analytic and critical thinking skills were shaped while learning at Crawford School and they will give us a competitive edge in the competition,” said Purba.

The Hult Prize regional final competition will be held in Boston, San Francisco, London, Dubai and Shanghai on the 13 and 14 March 2015. The Crawford School team will be competing in Shanghai alongside 39 other teams.

The students are able to travel to China and compete in the competition due to the support of Crawford School and ANU College of the Asia & the Pacific.