Home » News and events » All stories » We’ve only just begun 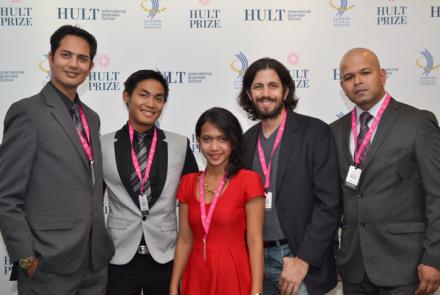 They were in China for a mere three days with the colossal challenge to tell an eight-minute story for the chance to win one million dollars to change the lives of 10 million children.

The Australian National University (ANU) Hult Prize team may not have come home as the regional finalists, but they have come home with a passion to see their beloved project, Mobokiddo come to life, with the help of the ANU community.

Mobbokiddo was the hard work of the ANU College of Asia and the Pacific and Crawford School Hult Prize team. The team was made up of Master of Environmental Management and Development students Olivia Dianina Purba and Thet Zaw, Master of Public Policy students Muhammad Farhan Akhtar and Xavier Flores Aguirre, and recent Master of International and Development Economics graduate Ashutosh Mani Dixit.

Together, the team came up with Mobokiddo – an initiative made to address early education issues for underprivileged children living in urban slums. The team was given eight minutes to impress the judges in Shanghai with their proposed business model.

Working against the clock, the team carefully prepared their pitch to change the lives of children living in the world’s urban slums by bringing an interactive and mobile vehicle to allow children to take part in educational activities in and around the vehicle.

But it wasn’t only education that the team focused their efforts on.

It wasn’t only their forward thinking and passion for the project that caught the judges’ attention and led to a second round clarification interview.

“We were so happy to get called back. Even though we didn’t win, it made us truly believe that what we were proposing was worth the time and investment we had made. The judges wanted to know more about our project – they were really interested in it. I think we’re onto something and if we can crowd fund to get the project up and running, the sky is the limit for us,” said Purba.

Between tackling their studies, the team has committed their efforts to building Mobokiddo through crowd funding and other sponsorship agreements with the hope of seeing their project come to life in the near future.

“The journey hasn’t come to an end for us. It’s only just beginning. We need to work on establishing the project and then keeping it sustainable without a need for ongoing funding. Our goal is to positively impact ten million children by 2020 – I think we can do it,” said Purba.

For now though, the students are concentrating on catching up with all the work they’ve missed while preparing and participating in the competition.

“We could have never achieved half of what we did without the constant support and guidance of Professor Paul D’Arcy and the financial support from ANU College of Asia and the Pacific and Crawford School of Public Policy. We really appreciate the investment the school’s made and we hope we did them proud,” said Purba.

The team encourages other students thinking about competing to take the leap to participate in the Hdult Prize.

“It’s a lot of hard work – trying to coordinate Skype meetings, research and dress rehearsals is exhausting. But finally getting up on stage and pitching our project to a panel of judges and representing The Australian National University was a once in a lifetime opportunity.

Read more about the team’s journey from the beginning: https://crawford.anu.edu.au/news/5388/five-minutes-change-world