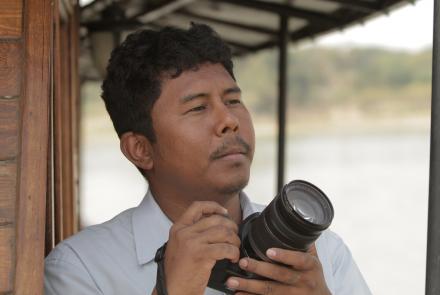 A river runs through it
What are the social and economic consequences of New Zealand giving a river legal personhood?

Before he commenced a PhD at Crawford School, Myint Zaw was paramount in stopping the construction of a massive hydroelectric project alongside Myanmar’s Irrawaddy River.

Bowing to public pressure, the country’s former President Thein Sein halted work on the Chinese-backed Myitsone dam project in late 2011, acknowledging it was contrary to the will of the Myanmar people.

In a special ceremony in San Francisco on Monday Mr Myint Zaw - a student in the Resources, Environment and Development Program at Crawford School - was awarded a 2015 Goldman Environmental Prize – the world’s largest award for grassroots environmental activists.

The award, which comes with a cash prize of US$175,000 to further environmental work, recognises Mr Myint Zaw’s launching of a national public awareness campaign aimed at demonstrating what his country stood to lose from the Myistone dam project.

Such losses included the forced relocation of thousands of ethnic Kachin people to resettlement villages when construction of the dam began in 2009, further stoking ethnic tensions.

Located at the junction of May Kha and May Likha, 43 kilometres upstream from Myitkyina, the capital of Kachin State, environmental concerns included decreased fish populations and blockage of rich sediments, affecting countless farmers, fisher-folk and boat-operators along the river.

“I was born in a village near the Irrawaddy River delta,” Mr Myint Zaw says in a short film on the Goldman Environmental Prize’s website.

“I have always had a love for the river, which is the lifeblood of our people. Our culture depends on it.”

Also a photo-journalist, Mr Myint Zaw knew the risks of launching a campaign in a country that up until 2013, heavily censored the media.

To avoid attention from government authorities, he organised art exhibits – a strategic choice given the galleries were among the few spaces where he could engage activists, scholars, artists, and citizens while avoiding government scrutiny.

“We were nervous during the first exhibit,” Mr Myint Zaw says.

“So we only ran it for half a day. After our guests saw the show and heard the speeches, we quickly packed up and left.

“We were distributing scientific data and educational material without government permits. We were always worried about getting arrested.”

The series of art exhibits turned into a national advocacy movement. Artists began writing poems and songs about the river. Citizens spread pamphlets and DVDs about the dam in their own communities.

In a country that was until 2014, largely devoid of email and social media technology, the strategy was a masterstroke.

Mr Myint Zaw realised the reach of the campaign while riding in a taxi in Yangon. The cab driver recognised him as one of the people featured in an anti-dam DVD he had seen. In turn, the driver made 20 copies he passed on to friends.

The dam has not been permanently halted. Its fate will be determined by Myanmar’s incoming president, with elections due in late 2015. One thing is for sure – given the widespread awareness of the dam and negative consequences, the government will no longer have the luxury of unilateral decision-making.

Read more about Mr Myint Zaw’s work and watch a video about him at the Goldman Environmental Prize website.