Home » News and events » All stories » Inside a superpower 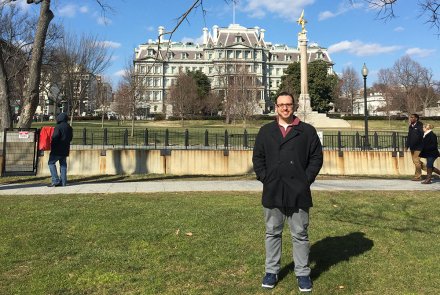 Put yourself in the heart of US policy action
Apply for the Congressional Research Fellowship Program.

Master of Public Administration and Master of Public Policy student Tim Balin was one of two winners of the 2016 Congressional Research Fellowship Program, spending three months earlier this year in Washington DC in the office of United States Senator John McCain.

The Congressional Research Fellowship Program places outstanding ANU honours and graduate students, and recent ANU graduates, in the offices of United States’ Senators with an aim to identify and foster a new generation of leaders while promoting investment in the Australia-US relationship. Applications are now open for 2017 fellowship. Find out more and apply, the closing date is fast approaching.

Tim said his Fellowship experience taught him a lot about US-Australia relations, US politics, and the fun of live sporting events.

“It was an honour and a privilege to represent ANU and the Australian community in the office of a United States Senator and be part of the ongoing legacy between the countries.”

Rubbing shoulders with America’s political elite, and a former presidential candidate was a unique experience.

“Seeing first-hand how the policy-making process in the US works was amazing, as was meeting Senator McCain,” he said.

“The Senator represents Arizona and is the Chairman of the Senate Armed Services Committee. A Vietnam veteran and former prisoner of war, he was the Republican Presidential nominee in 2008.

“My impression was that he genuinely cares about his constituents and hasn’t forgotten who put him in office. He’s a very energetic and interesting character who’s lived an incredible life. I only had the chance to chat with him one on one a few times but saw him in action every week.”

As part of the fellowship, Tim attended a wide range of interesting events. He even went to the home of the President himself.

“Every day there are briefings by different organisations and lobby groups which are listed in the online ‘Capitol Grapevine’. Congressional staff go to these to get more information on a topic to feed back up the line to their member of Congress,” he said.

“I went to a fascinating NASA briefing, launching their new concepts for the future of flight.

“My office also arranged for me to visit the White House. As a politics nut, it was awesome to see where important historic decisions were made and get a feel for the place.”

But it wasn’t only American politicians he rubbed shoulders with.

“Prime Minister Malcolm Turnbull gave a talk at the Center for Strategic and International Studies. It was great to hear our new leader speak in these surroundings,” he said.

“I also went to a couple of functions at the Australian Embassy – which is, unfortunately, the ugliest building in Washington DC! One was while Minister of Foreign Affairs Julie Bishop was in town for G’Day USA – a program which promotes Australian capabilities in the United States. I got to chat with her and also spoke to the new Ambassador, Joe Hockey. I even met Tony Abbott briefly when he was visiting Senator McCain.

“If someone had told me before I went that I’d meet so many powerful people I wouldn’t have believed them. It was mind-blowing.”

Tim’s time in Washington DC wasn’t all about politics, though.

“During January’s ‘Snowmageddon’ – the largest snow storm to hit the east coast in 50 years – I went tobogganing down the steps of Capitol Hill. I’ve never seen anything like it. The public transport was shut down and we had a couple of days off work,” he said.

“As a huge Basketball fan, I was thrilled to get along to a game between the Washington Wizards and Chicago Bulls, even though I was sitting up in the ‘nosebleed’ section. There were heaps of activities throughout the game to interact with on your phone. The planning was amazing too – no lines to enter or exit the stadium or to buy food.”

The Fellowship has also opened up a new way of thinking about international relations and politics.

“I’ll question the way we do things more in future, to see how they could be done better. I’m also more accepting now of the existence of bureaucracy. Sometimes it can be inefficient but it could be much worse.

“I was so lucky to have this life-changing experience and I’d go back there in a flash.”

Applications for the 2017 US Congressional Research Fellowship Program close on Monday 29 August at 5pm. What are you waiting for? Apply now.