Home » News and events » All stories » Coming to terms with Asia 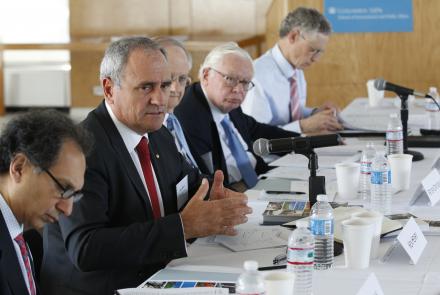 Australia-China ties
A new report outlines the future of the bilateral relationship.

The issues raised by Australia’s Asian Century White Paper were up for discussion by top US thinkers on Asia recently when the East Asian Bureau of Economic Research (EABER) hosted The Asian Century and Global Response meeting at Columbia University in New York.

The meeting, held on Wednesday June 12, brought together 20 of the leading US academic thinkers on Asia to discuss the major issues raised in the White Paper.

They met with a delegation led by Crawford School’s Professor Peter Drysdale and Dr Ken Henry, both members of the White Paper’s advisory board. The delegation included the Commonwealth Treasury Executive Director Dr David Gruen (a Government member of the White Paper Advisory Board), Professor Yiping Huang from Peking University and ANU, and Crawford School’s Dr Shiro Armstrong and Associate Professor Philippa Dee.

Drysdale said the meeting saw some big issues being tackled.

“There is much more to the success of the Asian century than China, but many of the challenges for the United States are questions about China,” he said.

“These challenges include: how will China and the US interact on global issues? Should they attempt to find common ground between themselves first, before badgering other countries into line? Will China push for separate spheres of influence for the two countries, a tendency that can already be observed today? And what will be the role of middle powers, like Australia, be in this evolving architecture?”

Also discussed were the rise of Asia and its impact, including future growth prospects in Asia, the security and strategic implications of shifting economic weight, and the adequacy of the global regime and architecture. These themes were at the heart of the Government’s White Paper. A summary of the day’s discussions can be found on the EABER website.

Drysdale added that the meeting demonstrated the strength of the partnership between ANU and Columbia University.

Further discussion on these issues can be found in the latest edition of the East Asia Forum Quarterly - Coming to terms with Asia.