Home » News and events » All stories » Prayers for Nepal 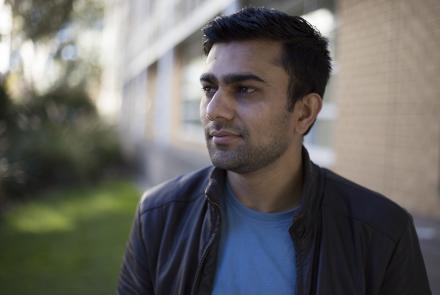 ANU Nepali Student Association (NeSA) aims at creating and fostering an interactive and informed network of students for knowledge sharing, research and development among and outside ANU community.

When the 7.8 magnitude earthquake hit Nepal on Saturday, Crawford School student Bishal Chalise had just collected his wife from the airport. She was returning to Australia having spent some time in their home country.

A call from a family friend alerted them of the devastating earthquake.

“He called immediately after the first shock. At that time we didn’t have any knowledge about how severe it was,” Bishal says

“After the earthquake we kept calling our friends and our families to see if they were okay. I tried for two hours to contact them. It was really painful. I got to talk to my brother first. Then I was able to speak to my mum.”

Three days and more than 100 aftershocks later, many people remain unaccounted for. The death toll from the disaster now sits at more than 3,200.

“Most of the information that we are getting now coming out is focussed on Kathmandu area. We don’t have any information whatsoever regarding what’s going on in the rural parts where the epicentre of the earthquake was.”

Access to remote villages has proven to be a significant challenge for relief workers.

“Most of the rural areas don’t have road access. The only way you can reach them is by walking or by helicopter,” says Bishal.

“There are some villages where even the helicopters cannot land. We will have to wait another couple of weeks before we have a complete picture in terms of the damage the country is facing.”

Speaking of the devastation that the earthquake has caused, Bishal laments the loss of cultural heritage.

“The most painful thing is to see the places that you feel like your own. The places we hung out. Where we played during our childhood. It’s nowhere. It’s gone. It’s not going to come back.

In an effort to support humanitarian efforts, Bishal and the ANU Nepali Student Association (ANUNeSA) are calling on the ANU community to contribute funds. All monies raised will be donated to the Nepalese Prime Minister’s relief fund.

More than 100 students and staff held a minute’s silence on Tuesday 28 April in a special vigil for the victims.

Those interested in making a donation to the relief effort can do so via UNICEF, Red Cross Australia, or other preferred reputable agencies.